Share All sharing options for: Deserved Success via Good Process

The Steelers have been a very good team for a very long time, going back to Chuck Knoll, through Bill Cowher, and now under Mike Tomlin. It doesn't really matter what plays they've run on the field--at times, they were pass-happy, and most of the time they've been run-first--because their process for building a team has always been sound. On both sides of the ball, they build from the lines out, and adjust their playcalling to the personnel on hand. It's a basic formula for building a team, they've been steadfast in adhering to it, and success has followed.

The Cardinals' head coach is Ken Whisenhunt, who was a Steelers assistant under Bill Cowher before getting the head coaching job in the desert. He took a team that Dennis Green had started to make respectable for the first time in decades and finished the job. Whisenhunt also demanded the Cards improve their line play, bringing in Russ Grimm to coach the offensive line, for further emphasis, but his biggest, and ballsiest, contribution was to play the best players, no matter their histories and reputations. Benching Matt Leinart in favor of Kurt Warner is the most obvious example, but Whisenhunt also benched Edgerrin James in favor of the unheralded Tim Hightower partway through the season, and rebuilt the lines from laughingstock status to units respected leaguewide.

I mean, just to give you an idea of how dysfunctional the Cardinals were: Fred Wakefield was a middling defensive end the first three years of his career. He missed a season with a foot injury. And then he started nine(!) games on the offensive line in 2005, and then played tight end and offensive tackle in all sixteen games in 2006. It's impossible to imagine Whisenhunt engaging in such purposeless gimmickry.

Here's how the Bobcats could apply the lessons the Cardinals, and to a lesser extent the Steelers, offer: Stop screwing around. Determine a course of action based on fact and sound reasoning, and stick with it. There is no substitute for Good Process. Even when things go badly, trust that the Good Process will yield positive results more often and more consistently than blind wandering. 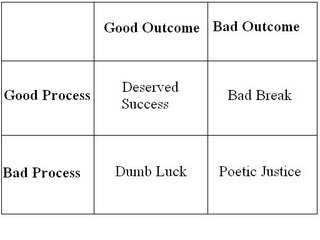 We have no idea what the Bobcats' plan for long term, sustained, success is. Look back as far as you want, and it seems like they've been throwing crap at the wall, hoping some of it sticks. Over X number of years, some of it will, but it won't necessarily be the right kind of crap. Gerald Wallace stuck. Emeka Okafor stuck. Those two aren't exactly kindred spirits on offense.

Compare to the gold standard for having a sound course of action and following it, the San Antonio Spurs. A short list of things they do that the Bobcats don't includes vigorous international scouting, operation of a D-League team as an extension of the NBA club, and defining the profile of a Spurs-type and signing those guys as role players.

Under Larry Brown, the Bobcats have stuck to a single style of play with a defined agenda, and everyone has bought in, even if that style is not conducive to his personal style of play (Gerald, DJ, Shannon Brown). This is unequivocally good. Even if it means that Gerald has no medium term future with the team and even if I, personally, yearn for a day when the team will be built in Crash's image, it's good, because he can be traded for someone who fits the system better than he does.

The problem is that under Larry Brown, the team has shown near-zero commitment to medium or long term plans. For the best health of the franchise, Jason Richardson should still be here. Jared Dudley should still be here, and Juwan Howard or Ryan Hollins or Richard Hendrix would be starting in the front court next to Emeka. All of that because while Boris Diaw and Raja Bell make this team better and give them a plausible shot at the playoffs this year and, perhaps, next, Diaw's contract is worse than Richardson's, lasting for yet another year longer. DeSagana Diop is a reasonably useful player who provides some defensive presence off the bench, but his contract is just as long and more expensive than Matt Carroll's. Again, he makes the team marginally better now, but at an unreasonable future cost. I'm sorry, but a core of Augustin, MLE Shooting Guard, Wallace, Diaw, and Okafor is not a title contender and yet is locked in for the foreseeable future.

The Arizona Cardinals demonstrate that winning begins with a sound plan. We'll have to wait at least another season to figure out what the Bobcats' plan is, but reading the tea leaves, it doesn't look good.