Welcome to Rufus on Fire, An Unofficial Charlotte Bobcats Blog

Share All sharing options for: Welcome to Rufus on Fire, An Unofficial Charlotte Bobcats Blog

Welcome to the brand new Rufus on Fire, now a member of SportsBlogs Nation. If you care about the Charlotte Bobcats, or pro basketball generally, I hope you'll stick around and participate in the discussion here. For those of you coming by for the first time, here's some background on me and my mission.

My name is David Arnott. I grew up in San Francisco, CA, spent my college years in New York, NY, and Santa Cruz, CA, and now reside in Charlotte, NC. 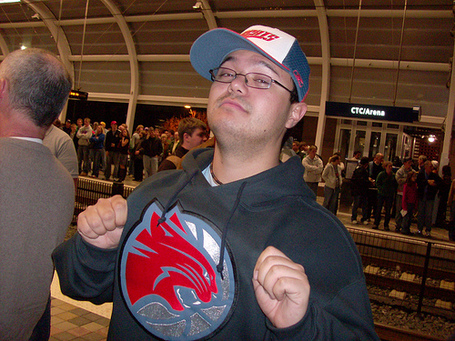 Where can I see other stuff you've written?

I've written for the SportingNews.com sports culture blog, FirstCuts, SportingNews.com fantasy sports coverage, and you may have read my general sports writing at the now-defunct Sportszilla and the Jabber Jocks. There are also several archived pieces at my personal web site, www.DavidAArnott.com.

Why did you choose the name Rufus on Fire?

The scientific name for the bobcat is lynx rufus. Thus, the Charlotte Bobcats named their mascot Rufus Lynx. The blog's name combines that bit of cheekiness with references to NBA Jam, Marv Albert, and a dash of a late 80s hip hop song

What are your qualifications? Are you a Bobcats fan?

I'm not just any Bobcats fan... I'm the Bobcats' Ultimate Fan. Of course, it's more complicated than that. Growing up in San Francisco, I never followed the Warriors (though I admit they have a special place in my heart); I embraced basketball and the NBA relatively late in life. That roughly coincided with my move to Charlotte, so I developed an attachment to the local team. All that is to say the Bobcats are the first basketball team I've ever truly followed. I also see basketball differently from people who grew up with the game; I'm skeptical of received wisdom, and I don't hold up bygone eras as a standard modern players can't hope to meet or exceed.

I thought the Bobcats don't have any fans. Why devote a blog to them?

The Bobcats have been near the bottom of the NBA in per game attendance in recent seasons. That is indisputable. However, I think the notion that they have no fans, or that Charlotte can't support an NBA franchise, is erroneous. The team simply hasn't been good yet, so the people who only casually support the team do not come out in force. I want Rufus on Fire to harbor intelligent discussion of the Charlotte Bobcats and basketball, in general. North Carolina has a proud basketball history, there's no reason why the Bobcats can't become a major part of that history, and there's no reason why we can't have a good time recording our observations of it all.

How do I get in touch with you?

My email address is rufusonfireblog at gmail dot com.

The beauty of the SB Nation platform is that you, the reader, will make this place as awesome as it can be. See the sidebars on the right? If you have an extended thought about the Bobcats that you'd like to share, you can create a FanPost that will show up there. If you have a quick thought, or just a link or photo, you can create a FanShot that will show up in the other sidebar.

What are you waiting for? It's the NBA! Let's have fun.