Share All sharing options for: Ron Artest Breaks Every Mold

This is a Swag-Eccentricity chart. Basically, it's a visual representation of players' public personalities as expressed both on the court and off. The Eccentric to Mainstream ratio measures how much that player's demeanor would stand out while he walks through a WalMart. The Swag to Play ratio measures how much of the player's confidence shows in how he carries himself on the floor, as opposed to simply bearing down and playing. 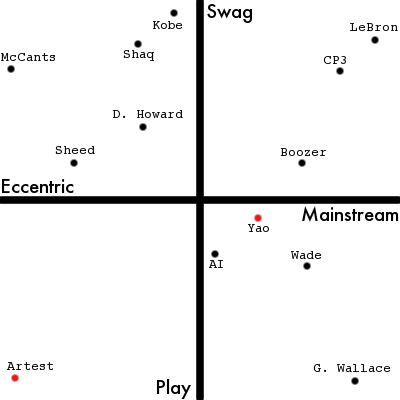 Maybe I haven't seen Ron Artest enough, but I'm fascinated by his capacity to simultaneously play like an All Star and act the fool. He seems like a thoughtful and intelligent guy, but there's so much going on his head that we're probably never going to figure him out, and that seems to be at the root of why teams can't deal with him after a while.

Might Artest's best comparable be Dennis Rodman, the Worm himself? He produces and produces, but there's a fine line between tolerating poor behavior in exchange for said production and enabling poor behavior because you've decided you can't do without that production.

I don't think there's anyone else in the league who can match his brand of occasionally destructive eccentricity combined with a deep and abiding dedication to basketball (a one time comment about Tru Warier record promotion aside). Artest is at the margins of character type in the NBA. It seems everyone else who is labeled a team cancer plays with swag out of whack with his skills; from McCants to Ricky Davis to Sprewell to Marbury, the swag is both a cause and result of resentment.

Not so with Artest, whose approach on the court doesn't really come off as billed. Like Dane Cook's "humor" gets labeled as frat boy comedy, when really he's just telling geeky anecdotes that don't have punchlines and engaging in flights of fantasy, Artest would be hailed as a prime example of a hard worker who pulled himself up by his bootstraps and became more than what God gave him, if he weren't so damn weird in public.