Bobcats Top Bulls; Ben Gordon Must Be Torture to Play With

Share All sharing options for: Bobcats Top Bulls; Ben Gordon Must Be Torture to Play With 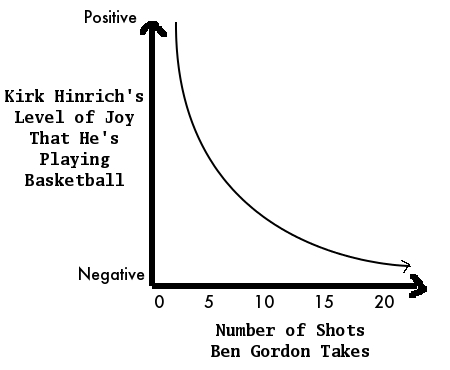 The Bobcats easily dispatched a wrecked and beaten Chicago Bulls team, 96-80, on the strength of a hot shooting streak and defense the Bulls just weren't talented enough to beat.

That above chart illustrates the most visceral sense I got from the game. Poor Kirk Hinrich was usurped as starting point guard by a uniquely talented young dude, a transition hastened by injury to Hinrich. However, I think he could handle that, because he can slide into a combo guard role. What he can't handle (or what I wouldn't be able to handle if I were in his shoes) is having to play second fiddle to Ben Gordon, a ball hog par excellence who doesn't play defense. Compounding matters, Vinny Del Negro was without Luol Deng, so Chicago played long stretches with Rose, Gordon, and Hinrich all out on the floor, resulting in such odd matchups as Hinrich guarding Radmanovic.

It was comical watching the game deteriorate as Gordon took more and more shots, and only after it was decided did he attempt to sling a few passes. In fact, on one play he created a turnover because nobody expected him to pass. Joakim Noah was rolling toward the goal when he saw Gordon had the ball. Noah looked up, expecting to see a shot bouncing off the rim, but instead, Gordon had jumped in the air and whizzed the ball by Noah's head, shocking everyone in the building.

The box score won't show that Gordon was terrible, only that he hit 6-15 shots and turned it over 5 times in 39 minutes. The thing is though, every time he launched another contested jumper instead of taking his time and trying to find an open teammate, it deflated his guys, and they held their heads down as they trudged back to play defense.

For the Bobcats, Raja Bell shot very well, 7-11 from the field and 2-2 from three, to score 18 points in only 29 minutes. Raymond Felton played 42 minutes, but 18 points and 9 assists is nothing to sneeze at.

Ultimately, the Bobcats' biggest "star" was the team defense. There were a couple of egregious miscues, both off of inbound plays, one in which Rose caught everyone napping and sprinted three quarters the length of the court for a layup, and once when no one covered Brad Miller, and he went for an easy dunk, but other than that, the defense stepped up big time.

Miller grabbed 7 offensive rebounds, which shouldn't have happened, but otherwise, the Cats held the Bulls in check. Chicago only shot 39% from the field and 3-15, 20%, from three.

In a game where Charlotte had the talent advantage at every position except, perhaps, point guard, they won exactly as we might have expected: only a little better position by position, but it all added up to a decisive win.

With only seconds remaining in the game, Alexis Ajinca and Aaron Gray engaged in some extracurriculars, with Gray shoving Freedom Fries and Ajinca throwing the ball at him. A double tech was assessed, but no one was ejected, and that should be that.

Next up, the Atlanta Hawks at home, a must win if the Cats are to keep their slim playoff hopes alive.