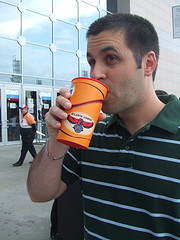 I've been to an NBA playoff game. Last year, three of my friends and I made the drive to Atlanta for Game 3 of the Celtics-Hawks series.

First--and I'd be remiss to omit this point--that weekend was incredible for many reasons beyond the game, itself. The drive was an unequivocally successful male bonding session, over arguments about Jack Bauer versus John McClane, and such. Once in the city, we made dozens of jokes about Andrew Young before we found out exactly who he was. We got free beer at Hooters. We got free Coca-Cola in Centennial Park. After the game, we hopped in a cab, told the cabbie to take us to Buckhead, he told us it would take way too long to get there and he knew a better place, so he took us to to the front door of Cosmopolitan, where we dove into one of the best parties I've ever attended. It was lovely.

But the game was excellent in and of itself. It will probably go down in history as the night Josh Smith asserted himself and sparked a run by the Hawks that nearly took down the eventual NBA champs. Phillips Arena may not have been full, but it was deafening and intimidating and a euphoric feeling flowed. When Smith dunked on a breakaway, the crowd surged so much I thought my eardrums would pop. When Smith hit a three, the intake of breath and low, begging, "threeeeeee..." sounded like an incoming ocean wave, and when it splashed home, the resulting cheer felt like I was being pushed into the sand. 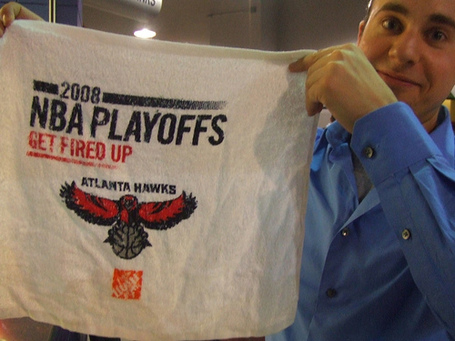 My point is that I didn't even really have a rooting interest, and yet I had a ball. Watching the Bulls and Celtics, and Rockets and Blazers, brings back memories of that Celtics-Hawks game, and how even the most apathetic major pro sports city in the country was up and rocking for an NBA playoff game. It will be a hell of a day when that show comes to Charlotte.