The Making of This Charlotte Bobcats Fan

Share All sharing options for: The Making of This Charlotte Bobcats Fan

Those hardy few who have read Rufus on Fire for a long time may recall that Jared Dudley was something of a cause celebre in these parts. It's not just because he was a perfectly useful bench player plucked out of the back half of the first round (see: paid very little), but that he directly contributed to me becoming a Bobcats fan. 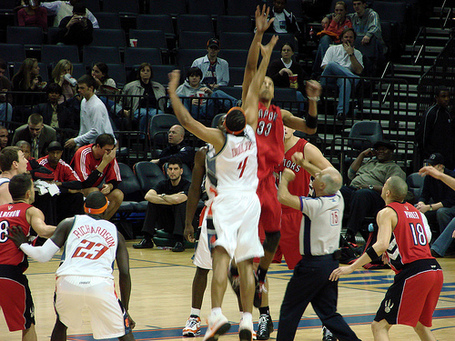 Remember that I'm a transplant and drove to Charlotte from San Francisco, alone. Before the 2007-08 season, my friend Kiriblazo convinced me to split a pair of Bobcats season tickets with four other guys. We had a ticket draft and everything. Essentially, we just wanted to see pro hoops. Four guys in our group already had NBA teams to root for, but Kiriblazo and I had never embraced or followed a pro team before. We figured we'd go to games and be the cool, detached, hoops connoisseurs liberated from the shackles of traditional fandom. That was not to be, because of Emeka Okafor, Gerald Wallace, and, especially, Jared Dudley.

Kiriblazo and I forgave Dudley everything. He took way too many threes that year, considering that he was a rookie coming off the bench and only hitting on 22% of his trey attempts. He was a Dominic McGuire type without the intriguing length and sheer athleticism. He was Luke Walton without the passing and a little more rebounding.

But his shortcomings didn't matter because he was ours. I felt as if no one else knew how good he was and that everyone else had written off the ACC Player of the Year as an undersized four who would be out of his element in the NBA. (Of course, The Sports Guy had sniffed out Dudley as a mid-late round sleeper early on.)

Emeka and Gerald were the bigger names and got a lot of the attention, so our punk rock tendencies probably pushed us toward the bench guy with the plus skills we thought the more casual hoops fans wouldn't notice. He rebounded. He didn't turn the ball over. He acted like he was pumped up for every game. Kiriblazo and I felt like we wanted to hang out with him, and thus, we wanted to be around the Bobcats more, and thus, we bought Bobcats jerseys and started buying tickets from our buddies, who were losing interest in the season.

The most glorious moment of Dudley's season came when I was out of town, on vacation, and unable to watch the game. January 12, 2008, the Bobcats were supposed to be blown away by the visiting Detroit Pistons. That was because they were without a point guard. Raymond Felton had injured his ankle and Jeff McInnis--despite sucking, he was getting big point guard minutes, you'll remember--was also incapacitated. So the 'Cats were reduced to starting Jason Richardson and Matt Carroll in the backcourt. They only suited up eight guys: J-Rich, Carroll, Wallace, Dudley, and Okafor as the starters, and Nazr Mohammed, Ryan Hollins, and Jermareo Davidson--three centers--on the bench.

So, of course, Richardson and Dudley(!) shared the point guard role, and they pushed the Pistons to their limit. Dudley only had 6 points, 1 assist, and 3 rebounds in 30 minutes, but he also had only 1 turnover. The Cats lost in overtime by three, but when I got back to Charlotte, Kiriblazo gushed. It wasn't as if Dudley had scored 19 and grabbed 15 boards (like Okafor) or scored 19 with 13 boards (like Mohammed). It was more the simple notion that our buddy--rationally, I know my relationship with all Bobcats players is completely non-existent from their point of view, but that is how I felt about him--had been a big part of something special and nearly pulled off a feat that could have led SportsCenter.

I'd already started Rufus on Fire on its first platform (SB Nation is the third), but that game sticks out in my memory as a turning point. Kiriblazo isn't in Charlotte anymore, and we don't chat as much as we used to, but I have him and Jared Dudley to thank for making me a Bobcats fan.

None of us were born Bobcats fans. Do you have a story?