What have we learned about the Bobcats after three games?

Share All sharing options for: What have we learned about the Bobcats after three games?

When will the Bobcats get their first win? They're good enough to beat any team in the league on any given night, but the way I see their upcoming schedule, they might not actually be favored until Monday, November 15, at home against the Minnesota Timberwolves. Before that, their best chances to win will probably be when they play the Detroit Pistons and Toronto Raptors, two lottery-bound teams, on the road.

I bring this up as an entree to the larger issue of how confident you feel in the Bobcats, now that we're three games in to the season. I'm like everyone else: I react to recent events far more strongly than I should. D.J. Augustin is (likely) not an All-Star. Boris Diaw is (likely) not a rebounding specialist.

So, have we learned anything in these first three games that changes what we thought we knew about the Bobcats before those games? Kwame Brown has yet to play, and he probably will play ahead of DeSagana Diop in Larry Brown's rotation. Dominic McGuire has yet to be available, and there's no telling if LB will keep Derrick Brown and Gerald Henderson in the rotation ahead of him. Matt Carroll hasn't gotten into a game, yet, even though he seems like a reasonable choice to get a few minutes when Augustin is off the floor, even if only to stretch the defense a little bit.

I purposely avoided sticking to a single prediction for the Bobcats' final win total, because things change and the emotion of the moment will often overwhelm rational analysis. Right now, after flailing at the Mavericks and Bucks, and sinking below the Pacers' level, it's feeling way too much like 30 wins is in our future, and I'm searching for solid reasons why 40 wins is within reach.

Side note: Saw this in uptown today, at the Atrium... 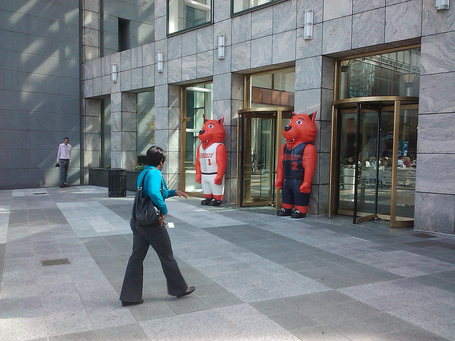 They were pretending to be static, and then surprised unsuspecting passersby.