When the Bobcats win a championship, I will dance, sing, hug, and high five

Share All sharing options for: When the Bobcats win a championship, I will dance, sing, hug, and high five

This is a photo of me, snapped by the Official Fiancee of Rufus on Fire the moment after Brian Wilson got the final out of the World Series, giving the San Francisco Giants their first championship. 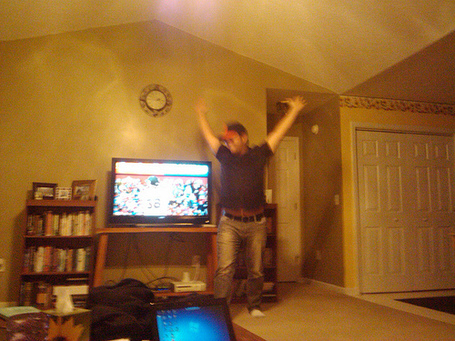 This is the first championship one of my teams has won since the 1994 NFL season, when the 49ers won the Super Bowl. At that time, I didn't really care about football; I cared enough to appreciate Deion Sanders's spine-crushing coolness, but the Super Bowl party I attended was just like every other one I attended in those years, and I was too young to care about the earlier Niners championships. This is new territory for me.

This morning, I heard on the radio sounds of San Francisco celebrating, and I welled up. 99% because the Giants have made so many of my friends and family happy with this championship -- the local team's championships and winning confirm the community's awesomeness, right? -- and 1% because I couldn't be there with them. Other than the Official Fiancee, I met one guy at a sports bar last night who was rooting for the Giants, and we left after the top of the seventh inning so we could hear the broadcast (the bar's audio was tuned to Monday Night Football). That photo above is mid-celebratory-spin, and I hope you can see the grin in the blur.

All that's to say, if there's one thing I discovered from following the Giants this year, it's that I have to Be There for my team's championship celebration to get the full payoff, the full effect of fan participation. I was happy last night, but not overwhelmed with joy like the people congregated in San Francisco's Civic Center.

Barring a monumental shift, the Bobcats won't win the NBA title this year -- that's just the way it is when your team doesn't have a Hall of Famer -- and that's okay. We're in this for the journey as much as for the confetti and balloons at the end. Supporting a pro team in any season is like taking a class in college: some people take it more seriously than others, some people skip out on lectures here and there, some people take it just to take it while others take it because the subject is their primary passion, and in the end you only get out of it what you put into it. A championship season is like having a professor who brings the possibility of transcendence to every class meeting, and at the end of the final test, everyone feels a shared sense of accomplishment. Again, your mileage may vary based on how much you put into it.

When the confetti drops, I want to be here, either in the arena with 20,000 brand new friends, or dancing on Tryon, hugging, singing, and high-fiving long into the night.