Share All sharing options for: The Bobcats, Good Process, and Bad Process

One of my favorite standbys is the Good Process, Bad Process discussion. Whenever it comes up, I have to remind myself that it's not necessarily a self-evident concept.

When I talk about the Bobcats and Good Process, I mean to separate what they're doing from what their results are. Results matter! But they only matter when they are properly contextualized and weighted. 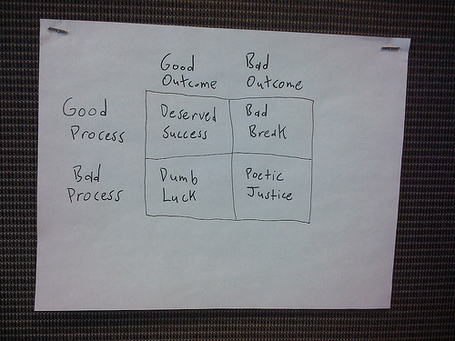 Actual paper pinned to the wall by my desk at work.

Let's take an easy example. Should we sign Joe Alexander to start at center for this team? On the face of it, that's silly and would be an outright disaster. Alexander is not big enough to play center, meaning he would get manhandled in the post on both ends of the floor, and even though he's got some quicks and hops, he's probably not skilled enough to put them to any decent use against huge, skilled opponents. Here's the key: Based on everything we know about Alexander right now, if we signed him, and he put up a 25/10 from now until the end of the season, playing center(!), it would still be Bad Process. The decision was a bad one, even though it worked out. The only way it could be classified Good Process is if our management determined there was some overlooked skill Alexander possesses that would make him a fantastic center, and pounced on him before anyone else could.

Don't get me wrong: I'd love the results, but relying on dumb luck is no way to run a pro basketball team. What we want is to maximize our team's productivity in the shortest amount of time possible, using the least amount of resources possible. Dumb luck can do it*, but I'll take Good Process, thank you.

*See: Signing Brian Scalabrine to a big contract before knowing which superstar might be gift-wrapped via trade.

And the most prominent way the Bobcats are engaging in Bad Process is their treatment of young players. This isn't youth basketball at the Y, where the goal is to have fun, learn some skills, and reward positive social behavior. this is about winning, and getting the most basketball production we can get.

Adults understand that working with other people involves tradeoffs. A talented psychopath might bring superior value in whatever skill he or she is most talented, but the psycho-ness might make working with other people an unbearable chore. But when the stakes are high and the rewards unfathomable, we're willing to put up with more and more negative social behavior.

The NBA is just such a place. A gathering of the modern game's greatest winners would be littered with insufferable people: Michael Jordan, Larry Bird, Kobe Bryant, et cetera... All were less-than-charming individuals who, nonetheless, were dynasty cornerstones.

It doesn't work the other way around. Fantastically thoughtful, sensitive, hard-working people can be superstars*, but getting along and friendship do not transform the talent-deprived into the talented. Talented people stay in the league despite doing all kinds of anti-social behavior. Untalented people ride the bench or find themselves playing in Belgium despite being Nobel Peace Prize candidates**.

So it is with Dominic McGuire (sigh) and Tyrus Thomas. Let's say Thomas is a jerk. Let's say he's an entitled whiner -- which would be weird, considering that he was underestimated in basketball and had to do extra to prove himself during high school, during college, and all the way up until he was the fourth overall pick in the NBA Draft, but we'll work with it. Let's say that Larry Brown genuinely dislikes him as a person. Even if all of that were true, does that outweigh how much better Thomas has been than McGuire (sigh) on the court?

If Larry Brown thinks character matters more than production, then he's in the wrong business and ought to get to coaching middle-schoolers, pronto. Character may be an element of production, but it's demonstrably Bad Process to privilege character over everything else when developing athletes at the highest levels. Here's the test: how much do teams pay for guys who have ZERO on-court talent, but are the bestest people in the world? Answer: most teams don't bother, and the ones that do pay the minimum salary to that player. In other words, at most, teams value chemistry and Being A Nice Guy at below-replacement-level prices. Charitably, it's a $900,000 premium to sign a 10+ year veteran instead of a D-League rookie.

And if you think you can build a champion based on Nice Guy-ness primarily, with talent coming secondarily, you may be a genius who's found the most fantastic market inefficiency ever discovered.

Play the talent, Coach. Your buddy will have more time to hang with you on the bench.