Lockout Optimism All For Naught, Back To Stalemate | Happy NBA Halloween!

Share All sharing options for: Lockout Optimism All For Naught, Back To Stalemate | Happy NBA Halloween!

And now you see why I had no optimism in the seemingly upbeat round of negotiations and its following press conference.

Once again, talks between the NBA and NBPA broke off last week with an inability to meet at an agreeable BRI (Basketball Related Income) figure. One report claims that the negotiations ended after the players refused to drop any lower than 52%. NBPA president Derek Fisher said that the owners once again proposed a 50-50 split, in take-it-or-leave-it fashion.

And then David Stern and the NBA canceled the remainder of the November schedule, which for the Bobcats, included @ Cleveland, @ Philadelphia, vs Cleveland, vs Portland, vs Memphis, vs Orlando, @ Sacramento, @ Golden State, @ Los Angeles Clippers. Further, Stern said that a full 82-game regular season was not an option anymore.

Now they're scheduled to go to federal court on Wednesday! YAY NBA, IT'S FAN-TASTIC!

Hit the jump for Halloween fun!

As many know, tonight is Halloween.

Being an NBA dork, I'm dressing up as Mike Miller and his pet monkey. I bought his rookie Orlando jersey and a toy monkey to tie to my shoulder and voila! No one will understand it at the party I may go to, but I love it, so that's all that really matters, right? 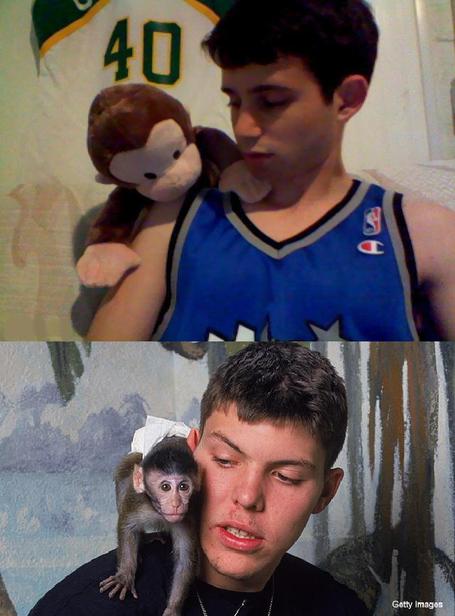 To spark some fun discussion (outside of the always-enjoyable lockout blame game), let's have some fun ideas of NBA Halloween costumes!

You could go as Gilbert Arenas and poop in people's shoes! Or Mike Bibby and ruin everything! Or Paul Silas and smile all the time! Or Tim Duncan (though I think he calls it "cosplay"). Or go as Russell Westbrook or a hipster - but alas, I repeat myself!

Or just say in the comments what you're really dressing up as. Whatever, have fun!