A Farewell to Gerald and Nazr

Share All sharing options for: A Farewell to Gerald and Nazr

Note: still holding off on concrete analysis until tomorrow, when I will have more time to write. 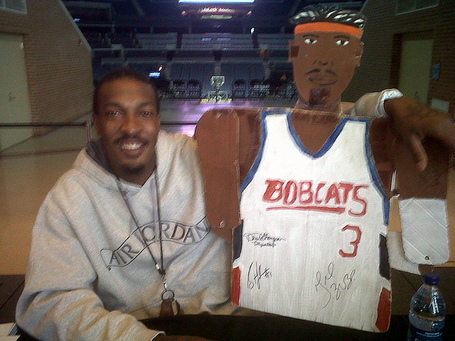 I met Gerald Wallace this past December at a Bobcats event in cooperation with Jordan Brand to release the Jordan XI 'Cool Greys.' Gerald was extremely gracious and delightful, joking around with kids, signing autographs, talking to fans, etc. When I asked if I could take the above picture, he smiled and without hesitation, posed for the photo. He was there with Stephen Jackson and D.J. Augustin signing autographs and meeting fans. At the time, I seriously thought that could have been the last time I'd see Augustin, as he was playing pretty poorly at the time and the Bobcats had yet to begin under Paul Silas.

Instead, it's Gerald Wallace who we won't see in a Bobcats uniform anytime soon.

I think we should all put our thoughts on the trade behind us for at least a few minutes to remember all Gerald did for our team.

Perhaps my favorite Gerald Wallace moment was the final series of plays against the Memphis Grizzlies last season. The Bobcats were playing some of their best basketball of the season, but struggled against the Grizzlies on January 9. They fell to a double-digit deficit early in the second quarter but fought to make it up throughout the game. But with half of the fourth quarter to go, the Bobcats tied it up and the two teams swapped leads from there on out.

The Bobcats held a small lead with about 20 seconds left when O.J. Mayo stole the ball and raced up court. As Mayo attempted the layup with Boris Diaw challenging from in front of the basket, Gerald Wallace sprinted on the other side of Mayo and somehow spiked back the layup from behind the backboard.

Memphis tied the game and Raymond Felton has the ball with eight seconds left in regulation. He drives right and throws up a prayer of a rainbow shot. It sails too far over the rim. But Gerald rises from weak side to tip in the shot right before the buzzer sounds. The crowd erupts.

I was in attendance at that game, and I can't imagine a better series of plays to exemplify who he is. He doesn't give up and he does just about all of the little things that players don't focus much on anymore. Shoot, he was leading the league in rebounding for a while last season.

And although this year has been disappointing, I'll still miss him - especially for giving me so much to enjoy on the basketball court.

Here's a great slideshow from the Observer from his years with the Bobcats.

As for Nazr, I don't have nearly as much to say. He's a great veteran player and a true professional. As a guy who admires the players who go out there and do their dang thing, I'll miss Nazr too, though nowhere close as much as Gerald.

Best of luck to these guys we've grown to love over the past years.

Leave some of your favorite memories of these guys in the comments.

Music of the night: Goodbye by the Spice Girls