Bobcats lose to Mavericks, 101-92; three quarters of listlessness give way to one quarter of thrills

Share All sharing options for: Bobcats lose to Mavericks, 101-92; three quarters of listlessness give way to one quarter of thrills

Good fans get frustrated with their teams, sometimes. You are a thinking, autonomous person who knows good basketball when he sees it, so it's okay to be annoyed when the team you root for doesn't play well. Furthermore, it's okay to be upset if you think you see an easy way for them to get better results. But remember: it's a pro basketball team, and no matter how much you care about this institution, thinking and caring about the team is rarely worth ruining your day, or someone else's day.

I wrote that at the end of the third quarter, anticipating a depressing blowout, and though true that it took until the fourth quarter for the Bobcats to start playing with an edge, those last eight minutes or so redeemed the previous forty and reminded me of why we stick around to watch. Charlotte played an exciting brand of hard-nosed ball that brought them within shouting distance of pulling even, though in the end it wasn't enough.

The Bobcats lost to the Dallas Mavericks on their home floor, 101-92. Going into tonight's game, the Mavs were the two-seed in the Western Conference, so it's not as if the Cats were favored, but the one disappointing takeaway is that our guys shot 37% from the field and allowed Dallas to shoot 47%, especially given the offensive explosion we saw last night against Miami.

Game thread comment, lowlights, and highlights after the jump.

-- I'm not sure what has to happen to get Derrick Brown on the floor. With Dominic McGuire, I've come around to the position that he's probably, in sum, going to be more valuable than Brown right now, just because he refrains from shooting enough to limit his negative skill, and he probably is a legitimate plus defender. But with Eduardo Najera, it seems pretty clear that he's not a good defensive player, no matter how much effort it appears he's putting into his play, and there's no way he's a plus offensive player. With Brown, he's a plus offensive player, and he needs work on his defense. But he's not really going to improve his defense without playing time.

-- Gerald Wallace pulled down 11 rebounds, which was good, and at times looked like the only one playing intense defense, which is better. That he scored 13 points on 15 attempts is, on the surface, not so great, but check out his shot chart. He was getting in the paint and attempting his shots there. It's a freaking miracle he only got 2 free throw attempts. 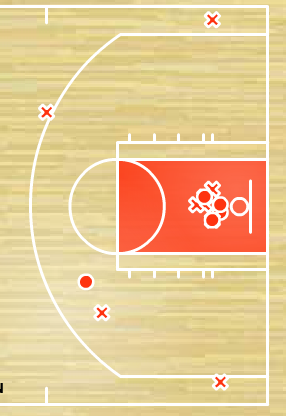