Guru - No Time To Play

Game Overview: These are no Cavs or Bucks here. The Bobcats will need to overachieve to steal this game, especially with leading scorer Stephen Jackson, Tyrus Thomas and Shaun Livingston all likely going to miss the game. Throughout their four-game win streak, the Bobcats have relied upon ball movement and finding the open man to get easy buckets. Boris Diaw has been the driving force, looking like the player we've been hoping to see consistently show up every game, trying to find his shot first and then looking to find his teammates.

The most glaring matchup tonight is at center with Dwight Howard against Kwame Brown -- and that's no knock against Kwame, who's been great for us. If Kwame and the rest of the Bobcats can frustrate Howard and force him into early foul trouble, the Bobcats could keep the Magic from finding their rhythm and focus on stopping the Magic's outside shooting as Orlando gets forced to a small lineup. Gerald Henderson will have a tough defensive matchup with former-Bobcats Jason Richardson but Hendo can take advantage of Richardson's, um, deficient defense. D.J. Augustin will also have his hands full on defense with quick-footed Jameer Nelson. I tend to think Dominic McGuire will get the start for his defense but I wouldn't rule out Cunningham either. The Bobcats will need Diaw to be aggressive once again, to draw and stretch the defense, opening up the floor for the rest of the Bobcats. Charlotte will have to execute the gameplan to a 'T' to come away with this one.

Key Matchup: Kwame Brown vs. Dwight Howard - The Bobcats have one center. The Magic have one center. If Kwame can get Howard into foul trouble, the Magic become a completely different team. Then the Bobcats can gain the height advantage as Orlando would be forced to put Ryan Anderson in. But if Howard gets Kwame in foul trouble (which is more likely), that could be a death knell for the Bobcats.

The Magic have pledged to not shave until the playoffs are over - And thankfully, the Orlando Sentinel has helped us visualize what some Magic players would look like. I can't wait for J.J. Redick's Teen Wolf phase.

Question of the day: What song were Gerald and Dominic singing after the Cavs game? 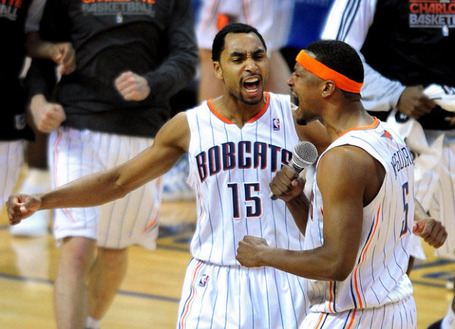 Original photo by Jeff Siner for the Charlotte Observer