In the first of my series of individual Bobcats players postseason analysis, I'm taking a look at D.J. Augustin.

It's tricky to do this analysis, especially for Augustin, as the point guard is often a reflection of the head coach. With such a monumental coaching change, it's not easy to make conclusive analysis. Nevertheless, let's take a look at what Mr. Augustin accomplished this season and what his future may hold.

To the surprise of many, D.J. Augustin played quite well as a starting point guard under Larry Brown. Unusual due to Brown's preference for players who can play above-average defense, Augustin's semi-success, though in the midst of a disappointing start, made many forget about missing Raymond Felton, who was playing pretty decent ball of his own in New York. Through the end of November, Augustin had 10 games scoring in double-digits and averaged 7.7 assists per game. But in what would be a theme throughout the year, Augustin would show inconsistency. His defense was particularly a point of concern as well. Another problem was the noticeable rift between Augustin and Brown. Larry Brown, though always a loud critic when teaching, was always especially demanding and disparaging with Augustin. As noted in recent comments from Stephen Jackson, Larry Brown's disposition had a chilling effect on communication with Augustin, who felt shut off by the coach.

After Brown's firing, Silas came in and looked to immediately change how things were run. Though Silas' optimal uptempo offense wasn't completely realized, his philosophy of preferring open players to shoot, allowed for Augustin and others to be more unafraid, whereas under Brown, shooting an open jumper would likely mean a stern talking-to. The coaching change seemed to have a direct positive effect on Augustin. He came out firing, dropping 27 and 28 points in the first two games under Silas (though this was against Detroit and Cleveland). January would prove to be an incredible month for Augustin, as he shot pretty well, efficiently distributed the ball while not turning it over hardly at all, averaging 18 ppg, 7.3 apg and scoring in single digits only once in the whole month. Unfortunately, he couldn't keep up the pace and faltered in February and couldn't regain his impressive January play. Though Augustin was and is a good shooter, he couldn't find his stroke at all in February, shooting under 40% FG in February and 26.5% 3P, while his ppg and apg dropped to 11.3 and 4.7, respectively. It should be noted that it was reported that Augustin had a minor wrist injury in February, but recovered and used the All-Star break to heal as well. March was an improvement, as far as scoring, but Augustin's inconsistency was more evident than ever. His shooting touch still hadn't really recovered much at all either, as his scoring uptick was due more in part to getting to the free-throw line more. His field goal and three-point shooting fell to new lows, going 36.9% from the floor and 20.8% from behind the arc. I'm not sure about the rest of Bobcats fans, but I was (and still is, to a lesser degree) definitely concerned about his future with such inconsistency shooting, when that is supposed to be his strong suit. Thankfully, April saw an Augustin resurgence. Note that this is a smaller sample size than other months, but Augustin's assists rose to 7.5 apg and his shooting percentages rose back above 40% FG and 34.5% FG for 16.1 points per game to end the season on a good note.

Though Augustin's season was very up and down, we saw him take some great steps in the right direction. His ability to finish at the rim improved greatly, as shown in his Hoopdata location stats, where his FG% at the rim jumped 13 full percentage points to 53.8%. He still gets blocked fairly often but he has gotten much better at getting to the hoop. His PER also rose to 15.96, above the NBA average.

My one big problem is his offensive inconsistency considering his obvious shortcomings on defense. To summarize D.J.'s problems on defense, he doesn't challenge shots well, doesn't fight through screens well, gets taken off the dribble by quickness, and isn't very strong or tall so he can get posted up with ease. But I'd accept that if he were more consistent on offense. He should be able to drop the open three nearly at a better rate. Regardless, Augustin made substantial improvements and proved that he can be a starting point guard in the NBA, even if he showed distressing stretches of inconsistency.

Looking to the future

So in addition to seeing D.J.'s offense get more consistent, I'd like to see him work on developing a more diverse offensive game. He showed us some of those moves as the season ended. Augustin also said he's looking to add a floater over the offseason. Perhaps one the most interesting point I'm looking at is how Augustin responds to having a much more trusting and encouraging coach to work with him in the offseason. 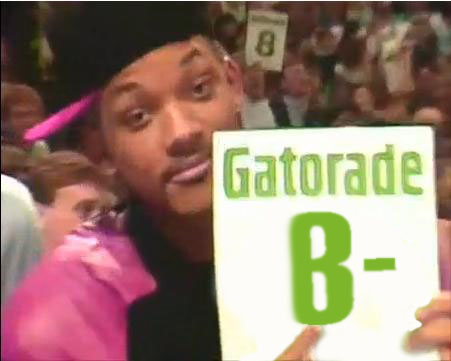