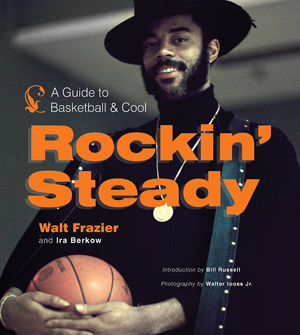 Last week, Knicks great and current Madison Square Garden Network color commentator Walt Frazier turned 66. It was brought to my attention that Clyde’s 1974 book, Rockin’ Steady: A Guide to Basketball & Cool, was being re-released nearly 40 years later. So I got my local bookstore to order it and picked it up a few days later.

To be frank, I loved it. Written by Frazier with the help of Ira Berkow, the book is very conversational. Throughout his account, Clyde delves into his past and current life, his instructional on how to play basketball, how he prepares for games and how he maintains his style. But above all, this basketball book is about the essence of cool. In fact, it practically oozes it.

Punctuated by charming and humorous anecdotes, it’s an easy and quick read. But that’s not to say it isn’t rewarding. Frazier certainly has a unique and refreshing perspective that makes you wonder about why anyone has insecurity.

Cool I think is reactions, reflexes, and attitude. You got to feel out the situation, You can’t be out of control.

The basketball parts focus on the fundamentals and it also includes a section analyzing the game of guards at the time it was written. While some parts don’t hold up well through the test of time ("Oscar is great, though he is getting old…"), generally, most of it does. Some parts are amazingly accurate, like this tidbit:

Hardly anybody blocks out that well anymore. I find that in the pros that guys don’t block out, especially on the Knicks.

The photographs and custom artwork are outstanding, too.

If you want more Clyde, my friend Megan Wilson interviewed him and wrote a more fashion-focused piece. It’s definitely worth a read.