With the draft less than two weeks away, I decided to pull together our guesses for the upcoming draft and put them side-by-side for comparison.

Hit the jump to see who we thought would get picked and where.

As you can see, the Bobcats' picks are highlighted in orange. Next to the names, you will see a positive or negative number in parentheses. That number is how much that pick deviated from the average. For example: I put Josh Selby at 17th, going to the Knicks. The (+6) shows that I put him six spots higher than the average of our three mock drafts. And of course, a dash means there is no change from the average. 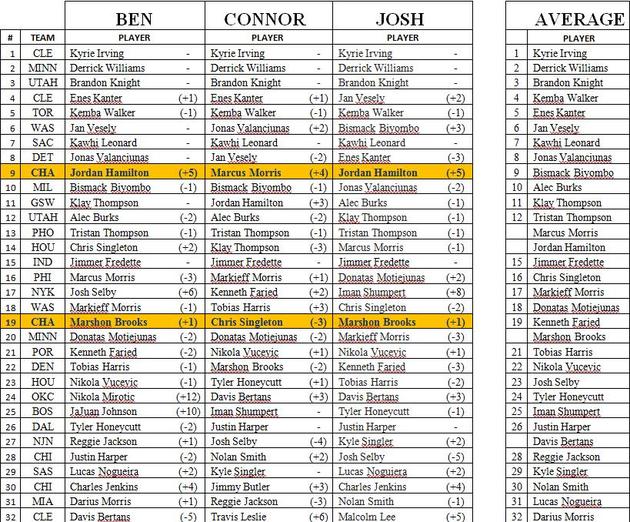 Josh also included some notes to explain some of his picks, which I'll list here:

2) Derrick Williams, unless Minny trades the pick
3) Brandon Knight, can't see Utah passing on a point guard like him
4) Jan Vesely. People don't realize how underrated this kid is. Cavs will gladly wait. They're in no rush (see: Baron Davis)
5) Kemba Walker, despite how much I'd prefer Kawhi Leonard (my man crush)
6) Bismack Biyombo. Say hello to Blatche's eventual replacement.
8) Enes Kanter. Weird to think that he'd drop this far, but I think teams are beginning to realize that he's a tad overrated.
9) Jordan Hamilton. Yup. Reminds me a bit of Jax minus the insanity. Fills a need. Talented.
10) Jonas Valanciunas. He'll fall due to his buyout, at least imo.
17) Iman Shumpert. Knicks'll love him.
24) Davis Bertans. Typical OKC pick.
31) Nolan Smith. Say hello to Miami's future. So I'd hope, anyway.

If you have any questions about our reasoning for other picks, just let us know in the comments.