Share All sharing options for: Counting Down the Top 24 Bobcats of All-Time -- #5-4

In order to keep some semblance of suspense, I'm waiting to name numbers 3 through 1 until Friday. Yay!

Though only in Charlotte for one full season, Richardson had some of the most talent in Charlotte history. Extremely athletic, Richardson could jump out of the gym. As many know, he had won two Dunk Contests before coming to the Bobcats in a draft day trade that included Brandan Wright. It looked like he was the go-to scorer the team needed for so long. And he was the best pure scorer the Bobcats have ever had, with a consistent jump shot and the talent to get to just about anywhere on the court to find a good look. His range was as good as it's ever been, shooting 40.6% from behind the arc in his only full season in the Queen City. His defense was more or less mediocre. His length and athletic ability allowed him to jump into passing lanes, but as an on-ball defender, he was lacking, making mental mistakes on reactions. That withstanding, he was a relentless scorer and he did so efficiently with explosiveness that hasn't been seen since he left in the Boris Diaw / Raja Bell trade. 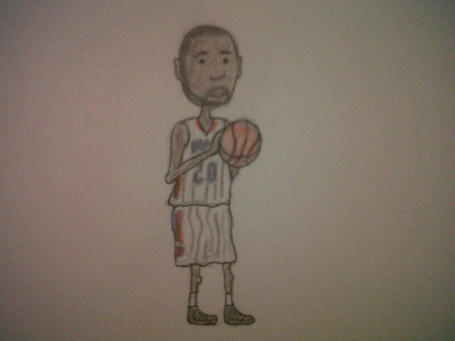 A North Carolina mainstay for years, Felton was drafted in 2005 by the Bobcats fifth overall. He had great quickness and decent athleticism despite a paunchy figure. He worked well in the pick and roll with his skill to dart into the lane or create passing lanes. His range and shot selection were inconsistent, limiting him from being a great guard. Though not presenting great size as a guard, his quickness and intelligence made him a good defender, able to pressure any guard. He wasn't a big risk-taker on defense, though. His development was hindered by a year under Sam Vincent who thought it would be a good idea to play him at the 2, for some reason. After his first year with Larry Brown as head coach, which was unimpressive, he had a breakthrough season in his final year on the Bobcats, helping lead the team to their first playoff berth. As far as intangibles, he was one of the best leaders the Bobcats have ever had. Vocal and tough, he was a veritable court general. His time in Charlotte came to an end after he was eviscerated by the quicker Jameer Nelson in the 2010 playoffs against the Orlando Magic and he sought out another team to pay him what the Bobcats wouldn't.