The NBA Lockout Beyond Basketball

Share All sharing options for: The NBA Lockout Beyond Basketball

If you haven't read Holly MacKenzie's article about what she misses and what the lockout is preempting her and us from seeing, you need to. It's a great piece of writing that beautifully reminds us of how many wonderful things there are to watch for whenever the next season comes, from how Kobe Bryant's knee surgery could possibly rejuvenate him to how Jonny Flynn plays in Houston.

But there's something I'd like to add. Working on the team side for the past few months with the Bobcats has broadened my perspective. I met a ton of people there, and without exaggerating, I can say they all love the game. If you've read any of my pieces on Bobcats.com, you know this. From Emily Ladd in Event Presentation who has played basketball since she was 5 and now dominates staff hoops to Josh Rosen in Basketball Communications who coached basketball at the JCC and has been involved in Charlotte pro sports since the Hornets, everyone I met has a respect and deep appreciation for the game. And being able to touch it in the job they truly enjoy is something I loved seeing.

So yes, I can't wait to see Kemba Walker and Bismack Biyombo take their first steps on the court or to watch how this young team bonds together, but the lockout affects much more than the basketball side, whether you realize it or not. I feel that I'm leaving out so much if I only say I miss the basketball side of things.

It's like draining a swimming pool (fig. 1). The majority of the NBA is the shallow water, the actual basketball. But going into the deep end, you have more to explore, in addition to the first three or four feet of water, that adds depth: Rhythm Cats after games, timeout entertainment, Rufus, giveaways - anything that adds to the NBA experience, all the way into the team offices. And now that the pool has been drained of that shallow water, the water that's left has little to no chance at sustaining the passionate basketball fans for an extended period of time. And one of the greatest delights that I get out of the NBA as a fan comes from seeing people that have an adoration for the game working with it, whether it's players or people in the suits. If you meet them, you can tell most, if not all, love to support and add to that basketball level of water. And with the game locked out, that passion is unfortunately forced into an unrequited relationship. If you can't tell, I fervently feel that the NBA product is deeper than the basketball. 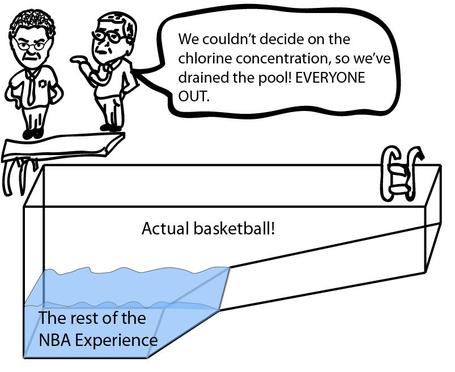 I've sat just about everywhere in Time Warner Cable Arena, from spitting distance of the back wall in the upper deck all the way to courtside (a story for another time). I've enjoyed intense emotional victories and sat through demoralizing head-scratching blowout losses. Never once have I wanted to leave early. The experience of going to and watching an NBA game is second to very few things, in my crazy, twisted mind. That may not be a sentiment shared by many people, but I love so much about it.

And that's one of the things I'll miss when this lockout indubitably cuts into our season.

I want to see Emily scurrying hurriedly during games making sure the timing of events and presentations are precise and to see her ideas for timeout entertainment come to life. I want to see the ushers I got to know a few years back and with whom I enjoy talking basketball and cracking jokes.

I want to hear calls from the popcorn vendors as they make the rounds in the stands. I want to see security guards smile at the main entrance as they see a child decked out head to toe in Bobcats garb. I want to see cooks and cashiers revel together in awe after seeing D.J. Augustin cross his defender, penetrate to the paint, hang in the air and finish a circus layup on the nearby TV across the counter.

I want to see a beaming Stephanie Ready's return to the court after having her baby during this past season. I want to hear Dell Curry's "YOUNG FELLA" on my television after Tyrus Thomas puts some unlucky sucker on a poster.

In addition to the players, I just want to see everyone involved with the sport able to return to being able to fully do their job that they love.

I don't want to have to see any more people have their lives negatively affected by this lockout. Let's hope it sees a quicker end than expected.