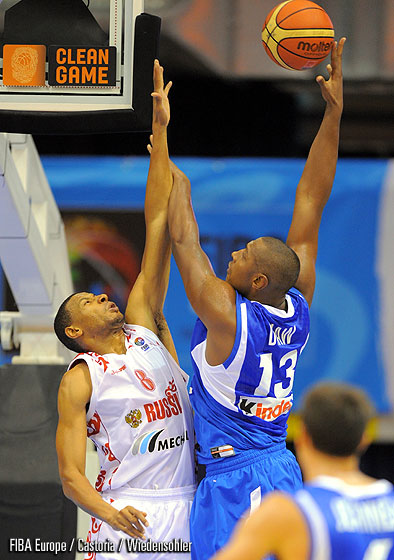 Zebulon Benbrook, the proprietor and manager of the SB Nation OKC Thunder blog, Welcome To Loud City, is in Lithuania for Eurobasket and was kind enough to write us some analysis of how Boris Diaw played against Italy last week.

Boris Diaw was definitely the savior for France in his game. While most of the team was focusing on finding open jumpers, Diaw was always finding ways to get open on the weak side of the paint, fool a soft Italian defender, or draw defenders to himself so he could make an easy pass. Diaw wasn't a guy who had an array of moves that could allow him to score in most situations. Rather, he did certain plays really well, and it served to help France keep a steady lead throughout the game.

Defensively, he was fantastic. He forced Gallinari, one of Italy's three main offensive options, into several off-balance shots and kept him to 38% shooting and offensive irrelevance in the first quarter.

Even though I said Diaw didn't possess an array of moves, I must admit that he definitely went outside the box in the fourth quarter. He was really good at finding ways to break down the Italian defense, shown especially by a play late in the game where he faked a handoff to a player cutting to the three point line and used the open space to drive for two foul shots. To cap it all off, on the next play, he drove into the lane and used a couple of crafty fakes on his defender for a clutch score to put France up by three late. They never looked back.