The Bobcats may have lost by 20 on Tuesday night, but there were some positives to take away from the game.

I knew those years of watching those bad and young Timberwolves teams would pay off. Based on that experience, tonight’s game was pretty typical of a young basketball team with a new coach. Young teams are like new puppies: they soil the carpet, chew on the furniture and bark all night like a team turns the ball over too much, blows leads, and makes some dumbfounding mistakes.

Nothing exemplifies this like the Bobcats committing just two turnovers in the first half, but turning around to commit six in the 3rd quarter alone. If you need more, the ‘Cats managed to put up thirty one points on the Thunder in the 2nd quarter, but then just fourteen points in the 3rd.

Being preseason and having both teams missing key players makes it hard to take too much away from this game, but you still want to look for some positives from a young team.

- The Bobcats overcame a slow shooting start (30%) – something that might affect a young team’s psyche – by forcing turnovers to stay in the game for much of the first half even though the Thunder hovered around an absurd 60% for much of the game. Hey, they even led for a little while.

- You know what else will help this team win some games if they can figure out how to control the ball and force turnovers for more than a half? Making free throws. Preseason or not, shooting 88% is a positive. Whether they can do that long-term remains to be seen, though.

- Ramon Sessions made the most of Kemba Walker’s night off with an 18-7-4 performance on 8-16 shooting.

- Gerald Henderson and Ben Gordon gave good production from the backcourt, highlighted by Gordon’s twenty one points and four assists.

- Hey, Byron Mullens made four three-pointers! But he took ten. That’s still 40%! Wait- that might be a lot for his position. He made four, though!

I’m not putting this as a bullet point because I’m not sure it was a positive, but Michael Kidd-Glichrist’s shooting was woeful tonight – 0-4 with 3 points – but still managed to snag 5 rebounds. Do we care more about his shot not falling or that he still found a way to help the team? Let’s just call this a mixed review.

Other than that, Mike Dunlap continued to experiment with roster to (hopefully) get closer to a set rotation. For instance, Matt Carroll and Gana Diop didn’t play, but Jeff Taylor got 8 minutes. Actually, I asked Rick Bonnell why his minutes have been so sparse even though he seems like a Dunlap player and this was the exchange we had: 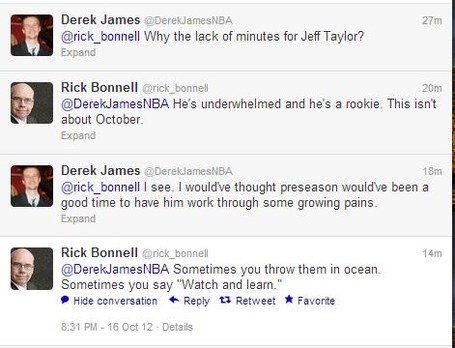 All-in-all, Taylor saw 8 minutes and scored 6 points, which hopefully means more burn for him down the road.

So this wasn’t exactly the Bobcats-Thunder game that I imagined I’d be writing about years ago as a child, but it was good to see some good signs (Tyrus looked good, too!), and probably Andy Rautins’ NBA highlight game. Since 500 words is plenty on this game, I’ll end this by saying see you Saturday against Detroit.