So it took the Bobcats three games to fall from 7th best offensive rating to 22nd. Welp, that's how the small sample size cookie crumbles, I suppose.

With that preface, let's look at how the 4-4 Bobcats might match up against the 6-2 Bucks. Brandon Jennings is playing like a man possessed, hitting strong marks showing improvement in shooting efficiently. He's being a better playmaker as a passer and even being more active defensively in forcing turnovers. Credit Scott Skiles for getting the combo guard combo of Jennings and Monta Ellis working well together so far. That part will particularly be intriguing to me as the season goes on.

One important factor for the Bobcats tonight will be if Michael Kidd-Gilchrist can stay out of foul trouble. Going back to the first line of this overview, you may wonder how the Bobcats won two of three games with a plummeting offensive rating. Well, their defensive improved in an inverse nature. Their defensive adjustments and rotations improved. Kidd-Gilchrist is statistically the best influence on both sides of the ball for the Bobcats thus far. Tobias Harris has done fairly well in his starting role so far, but he's nothing MKG shouldn't be able to handle. It's not just about the one-on-one dynamic, however. MKG's defensive advantages to covering ground and putting screws on opposing offenses is imperative and to lose valuable time to fouls would take away the Bobcats best chance at a mismatch in this game.

Ben Draws Something In Microsoft Paint: 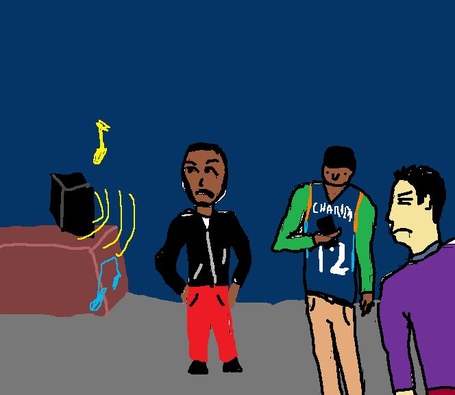 Tyrus Thomas probably hangs out at parties in his jersey and just checks his phone all night.