The Pacers have hit an unfortunate early speed bump with Danny Granger's being sidelined indefinitely because of left knee problems. Despite this, the team still has plentiful talent to ride until he gets back. Roy Hibbert is one of the best post players with great size today and is complemented by David West, who is also great playing on the block. Paul George is quickly coming along as a very talented all-around threat on offense and defense. Without Granger they don't have their best weapon, but they should get by regardless.

Last year, the Bobcats were simply annihilated by the Pacers on several occasions, losing by an average of 23 points. They didn't match up well, especially when trying to guard Hibbert, who shot an incredible 21-for-29 from the field in the three-game series.

Charlotte starts Brendan Haywood this year, whose size should help ameliorate that situation for the Bobcats. Still, the Bobcats will have to improve their defense against penetration and guarding a George Hill-David West pick and roll could be difficult. Offensively, the Bobcats will rely on their bench depth in the backcourt. The Pacers now have former Bobcat D.J. Augustin coming off the bench, who was never a particularly good defender. Utilizing their deep backcourt could prove instrumental in a game like this where the Bobcats are already out-sized, so perhaps we'll see some small-ball play to try to outrun Indiana.

It'll be an interesting one, that's for sure. I'll be interested to see Kemba going against Augustin in particular.

Ben Draws Something in Microsoft Paint 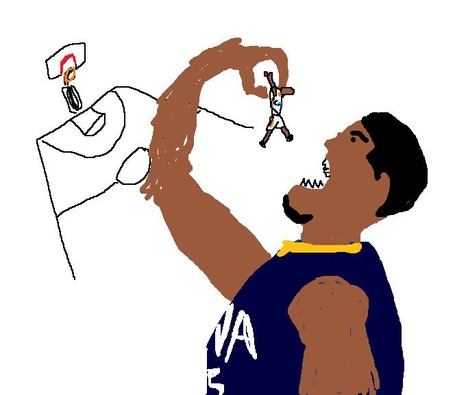