Heading into the season, the Raptors were the darling underdog team of the East. Fans were in high anticipation of rookie Jonas Valanciunas and Toronto had acquired rising star point guard Kyle Lowry. And then the season began and the team was playing well below expectations. Andrea Bargnani's most damaging on offense and his offense has been poop so far, shooting a 41.9 percent eFG%, which is just slightly better than Kemba Walker's from last season. So yeah, it's bad. Kyle Lowry was injured but is now back and the Raptors outbid the moon and stars and gave a big deal to Landry Fields, who is now injured after playing five games of heinous basketball. Thankfully, DeMar DeRozan has stepped up in a big way and is scoring well for Toronto. With Lowry back, this won't be an easy game. He's a dynamo able to impact the game as a passer, shooter, slasher, rebounder, etc. However, the Raps' defense has fallen from last year. Should be an interesting game.

Ben Draws Something in Microsoft Paint: 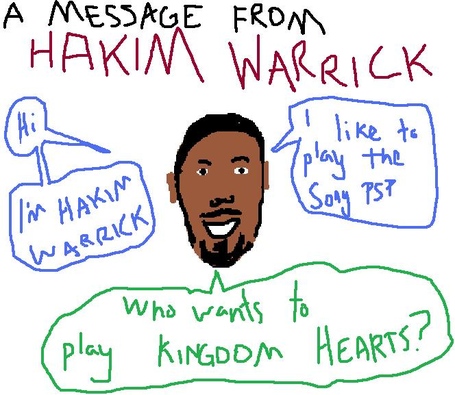 Hakim Warrick would like to introduce himself to you.