Hot chip - Out at the pictures (via harryvals)

New Hawks GM Danny Ferry has done more in the past six months to change the Hawks than anything they've done in the past 5 years. Joe Johnson is gone to Brooklyn and Marvin Williams is in Utah. In their steads, Devin Harris, Anthony Morrow, a first round pick and some other NBA detritus. In effect, Ferry yanked the Hawks out of the rut they were in and gave them hope to build upon their still mostly-intact core of Josh Smith and Al Horford. They also signed Lou Williams, which has added some scoring, albeit to this point somewhat inefficient. He makes up in his underwhelming shooting percentages with the ability to draw shooting fouls well, however.

The Hawks score very well at the rim, but don't get their as often as they should to exploit it (No. 3 in FG% at rim, No. 29 in FGA at the rim). Defensively, they're very good. They force opponents into plenty of turnovers and hold them to the second-worst 3P%. That doesn't bode well for a Bobcats team that's dead last in 3P% with 27.5 percent. But anything is possiblllllllllleeeeeeeeeeeeeeee.

Ben Draws Something In Microsoft Paint: 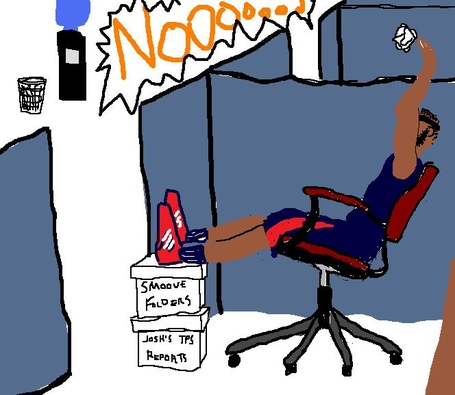