What a game. What a game. The Charlotte Bobcats had their behinds handed to them by the Oklahoma City Thunder Monday night in one of the worst losses in franchise history.

Share All sharing options for: Bobcats humiliated by Thunder, 69-114

We need a soundtrack for this.

Some of you are lucky. You watched the Panthers instead of the Bobcats. I, along with some other die-hard fans, had to endure one of the worst games in Bobcats history. Maybe the worst. Yes, worse than the 44-point loss to Portland last season.

Early in the game, the Bobcats led 6-4. The Thunder looked disjointed. The Bobcats looked great.

This may be the most difficult recap I've written to date. There's so little to take from this game.

Prior to tonight, the Thunder were 10-4. They looked good, but nowhere near as good they were last season. They're allowing opponents to shoot 43.7% from the field for 96.8 points this season, in contrast to 42.7% for 96 points last season. It's chemistry more than anything.

Tonight, however, the Thunder found their groove.

Because the second half was almost exclusively garbage time, I'm only going to look at the first half.

The easy thing to do here would be blame the Bobcats. Rather, I'm crediting the Thunder. Their defense looked better than I've seen it in a long time. It's not like the Bobcats were missing good looks. The Bobcats struggled to find any openings. If someone found a hole in the defense, the Thunder rotated perfectly and cut off all passing angles. Quite simply, the Bobcats were heaving up prayers at the end of the shot clock.

On defense, the Bobcats...how do I put this nicely? Tried. They tried. Unfortunately, the Thunder have Russell "Poopyface" Westbrook and Kevin "Bumhead" Durant.

The Bobcats tried to contain the Thunder's superstars. They really did. And for a while, it worked.

Russell Westbrook pretends to dunk and explodes for an unnecessarily elaborate layup in transition.

But you know how these things go. Superstars are superstars.

Kevin Durant bounces a pass around Brendan Haywood for a Serge Ibaka dunk.

There's just so little to take from this game. The Bobcats were outmatched. That's all there is to it.

Higgins looked like an NBA player tonight. Sure, it was garbage time but since Higgins is garbage I would like to think that it evens out. He had 7 points, 2 boards, 3 assists, and no turnovers. I don't think I've ever seen him as confident as he was tonight. So there's that.

Desagana Diop had 9 rebounds in just under 20 minutes. He looked serviceable, and if you squint hard enough, like a fairly attractive woman. His gluteus maximus is no joke. Massive. Shapely.

I don't know what to talk about.

Just be glad you didn't see this game. The Bobcats finished shooting 29% from the field and allowing the Thunder to shoot 51%.

Here, let me show you something. Please ask your children to leave the room. 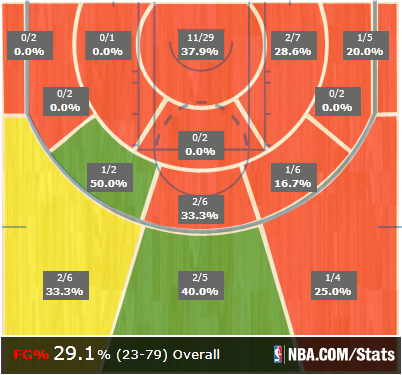 That hurts, doesn't it? Yeah.

It's unlikely that the Bobcats get beaten like this again, but it's humbling. The 7-5 start was undoubtedly flukey despite the Bobcats' undeniable improvement. This is just a reminder that the Bobcats have a long way to go.

But hey, the Bobcats are still better than the Lakers!