How the Bobcats Make MKG Effective

The Bobcats have found a very simple way to get rookie Michael Kidd-Gilchrist going in the offense, and they employed it Monday night against the Golden State Warriors.

Share All sharing options for: How the Bobcats Make MKG Effective

The Bobcats have liked rookie Michael Kidd-Gilchrist to get his looks as close to the basket as possible this season. However, that in itself is no secret as MKG has taken 59% of his shots from inside this season. He's done so with remarkable efficiency so far, shown by his eFG of .663% from that range, which is well above average. Considering that his shot is an area of development for the young player, and his eFG on jumpers of .275%, this is also smart coaching because getting him close shots plays to his strengths. A typical MKG shot chart will show you more circles near the basket, and more x's the further away you get.

The majority of his shots from this range are assisted about 56% of the time, so he's not just cutting to the basket, but doing things like rebounding on offense (1.8 per game) and as a result of being the focal point of a simple motion offense

The motion offense is a fairly basic basketball halfcourt set on offense. There are many different ways to run a motion play, but the fundamentals such as screens, player movement, and timing don't change. For now, we'll focus on the consecutive plays the Bobcats ran to get MKG the ball, and the options those plays give the Bobcats. For the purposes of this piece, we'll begin with the second play in the series. 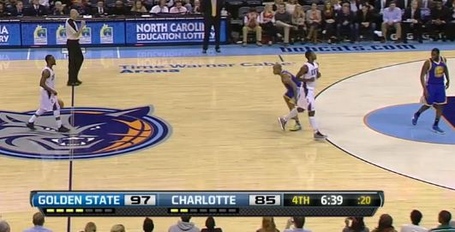 Here, we see the play begin with Kemba Walker bringing the ball up the court as MKG cuts in front to head toward the bottom right corner of your screen. You'll see it in the next shot, but Jeff Taylor lines up underneath the basket at the baseline, and Byron Mullens and Ramon Sessions get set on the left of the court opposite MKG. Nothing too complicated, yet. 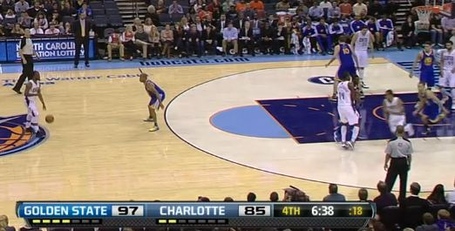 Suddenly, Sessions races across the baseline and out to the arc to receive the ball from Kemba, while MKG sets a soft screen on his man. In case you don't know, or were unsure, the movement is what makes this a "motion" play; it's that simple. These early movements are the exact same as the play they ran on the prior possession.

Now, we can see Kemba and Sessions up top, Mullens has slid over to the low block on the opposite side, and that Taylor has successfully cleared out the paint, giving MKG the ISO with the Warriors' Carl Landry (I'm calling this an ISO because of how far out on the perimeter he gets the ball; it's not really a post-up like we'll see later). Notice how MKG now has plenty of room to either drive baseline towards the basket, take a jumper (They'd probably rather he not do that) or attempt to back down Landry. This time, MKG chooses door number three.

(In other Motion sets, the Bulls in particular, have Rose come down to the paint after the initial movement to set a screen on a big man, but that's just one example of a variation where the point guard doesn't just remain at the top.) 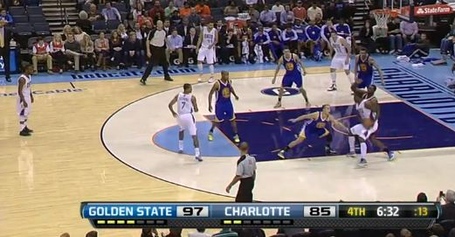 It's likely the Warriors sent Steph Curry to double MKG against Landry to make up for some of the quickness they give up in the mismatch, and because they just gave up a layup on almost the exact same play on their previous trip down the floor. However, choosing to double means that Jarrett Jack now has to watch both Kemba and Sessions since choosing to guard one means leaving another open.

MKG ends up passing to Kemba, who swings it to Sessions, who misses a driving layup with the open lanes created by the clear outs. The whole idea of this type of halfcourt offense is to give your team as many options as possible, and finding the best one. MKG choosing to defer to the open man instead of fighting the double team was certainly the better option although Sessions missed the shot.

Real quick, let's look at the previous play where MKG ends up kissing a lay-in off of the glass. The setup is the same, so we'll pick up where MKG receives the ball. 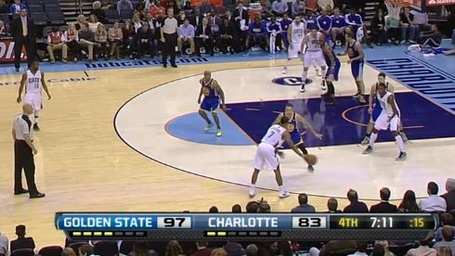 Notice how MKG has Klay Thompson on him, and is able to force him closer to the low-block than he was with Landry. Thompson isn't a great defender in the first place, but he's also giving up 25 pounds (They're both listed as 6'7, though.) to MKG as a guard trying to defend in the post. Quite frankly, Thompson is in way too deep with no help, so it's not hard to see why the Bobcats exploited this mismatch at all. 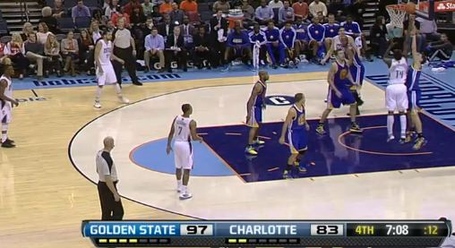 Finally, here's MKG laying the ball in over Thompson after backing him in and forcing him badly out of position underneath the basket. Of course, if MKG were unsuccessful backing in Thompson, there were plenty of cutting lanes for either Sessions or Walker to get a quick pass from MKG.

These are just a couple examples of how Mike Dunlap has featured MKG so far, but I don't know if they only use it when they play small, like they were here. However, it's not just an offense for one player; it requires the whole team to be in the right place at the right time, and there really are opportunities for everyone. For instance, on the second play, the Warriors don't make sure Landry gets MKG on that play if he wasn't so successful on the last possession. Which of course wouldn't have been successful without everyone having the proper spacing. Everyone executing this play properly the first time also meant that the defense had to respect it enough to double MKG that left a Bobcat open, and and open driving lane for Sessions.

It's basically basketball, but still a thing of beauty when executed properly, no matter how fundamental it is.