Kemba Walker and Michael Kidd-Gilchrist show their creativity, draw their own trading cards

Share All sharing options for: Kemba Walker and Michael Kidd-Gilchrist show their creativity, draw their own trading cards

This past summer, Panini America teamed up with the NBA's rookie transition program to create trading cards drawn by some of the league's best young talent. Because of the previous year's lockout, they also got some sophomores in on the action, including Kemba Walker and Kyrie Irving. While some players clearly had ulterior motives to make nightmare fuel for everyone -- coughEnesKantercough -- or to draw Donnie Darko fan art, others went with different interpretations.

Kemba Walker, for one, well ... I'll let the picture speak for itself: 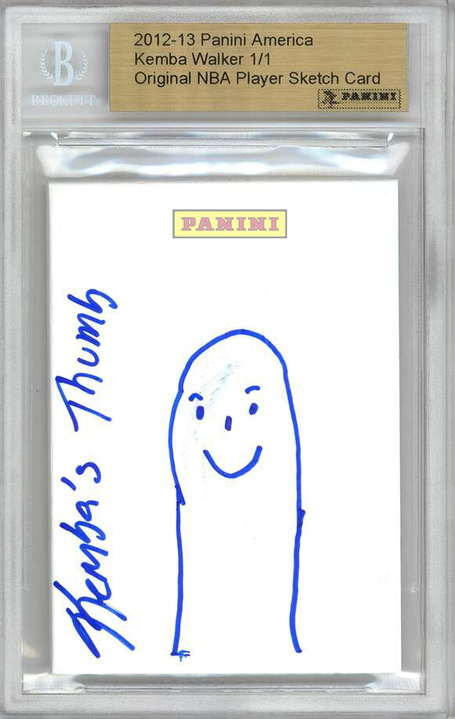 Hm. I like this. A lot. Unlike other players, Kemba took a piece of himself and made it his art. Painting and other works of art are often glimpses at the artist's self, but Kemba has literally done this. It's brilliant, really -- a magnificently tongue-in-cheek playing with art. Further, it almost seems like the thumb's face has two different sides to it: on the right, a normal smile, but on the left, the eyebrow is more cocked. The left eyebrow is mischievous and playful, smirking at the audience. The fingerprint smudge is an excellent addition to this, obscuring the mischievous left eye. Thusly, it's a perfect look at Kemba Walker's style of play - nice on one side, yet ready to explode at the same time with a wickedly tricky crossover dribble-drive.

A standing ovation and two thumbs up says I! 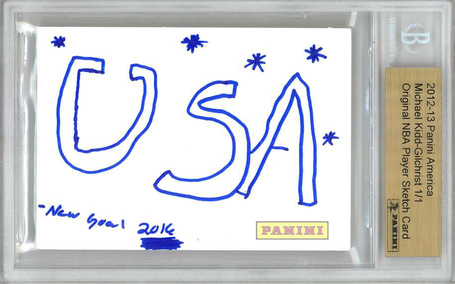 I'm a bit disappointed because this isn't so much a drawing, but just letters and asterisks. Aha, but that is just what Kidd-Gilchrist probably wanted the viewer to think! In a stunning showing of playing with the conventions of what art is, we must re-evaluate what art can be. In effect, he's created an homage to our country, these United States of America, combating the expectations of what culture is expected to be and then redefining it. Like Andy Warhol before him, who took simple images of soup cans and transformed them into insightful artworks, Michael Kidd-Gilchrist has announced his goal of making the USA Olympic Team in 2016 and transformed seemingly normal letters into a deep look at the simple love of a country and ambition beyond the traditional art form as we know it.

Is he the new Basquiat? Only time can tell, but I say yes.

After examining these works, I -- just your humble, experienced advanced art critic -- can only ponder: did these two wizards of art choose the wrong career by going into professional basketball instead of art school?