What does Kemba Walker's quarterly decline say about the Bobcats?

The Bobcats' ever-improving young point guard is actually showing a tendency to shoot worse as games progress. This indicates issues on both the macro and micro scale of the Bobcats' offense.

Share All sharing options for: What does Kemba Walker's quarterly decline say about the Bobcats?

In a wonderful twist after last season, Kemba Walker has proven to perhaps be the most consistently productive player on the Bobcats.

He has scored in double digits in every game but one: the abomination of an outlier that was the Oklahoma City game. In 23 games this season, Walker has shot below 40 percent in just seven. It's been a stunning turnaround from the previous year, when Walker could show up with an impressive scoring night or an underwhelming night when next to nothing fell through the hoop.

With this welcome change, there has also been a consistent pattern of his scoring. Progressively, quarter-by-quarter, Kemba Walker shoots worse each period. Respectively, these are his FG percentages by the quarter: 55.1, 43.0, 38.9, 37.0 (per Basketball-Reference.com)

Like any statistical analysis, a straightforward conclusion cannot be made. Statistics may indicate many advantages or disadvantages, problems or solutions but these are complex results of on court play. Bearing this in mind, Kemba Walker's shooting decrease is an enigma of many conflicting issues.

The Quarter By Quarter Facts

The first quarter is pretty much always the best quarter for Walker's scoring. Only one of his 89 first-quarter shot attempts have been blocked this season. It's also worth noting that Walker takes a paltry 29.2 percent of his shot attempts in the quarter at the rim, the lowest percentage of any quarter. Of these, he makes a whopping 73.1 percent, by far the highest of any quarter. Further, Walker is 7-for-11 on shots between 10 and 15 feet out, and 11-for-22 from 16 feet out to the three-point line. His three point percentage is 39.1 percent in the quarter, which isn't great but is somewhat moot because his effective FG percentage is nearly identical to his FG percentage if you only factor in two-point shots.

Kemba's shooting drops off a bit to the second quarter from the red hot 60.1 eFG% to a much less impressive 44.9 percent. It's not bad, but it's certainly a hefty drop for a team that relies on Walker often to keep them in the game. He takes a similar percentage of his shots at the rim, but the change in shot distance distribution comes at the 16-feet to three-point line location. Taking fewer threes, Walker takes a higher percentage of his shots at this distance, with results consistent with most of his shooting here: 52.2 percent. This is encouraging, but his scoring efficiency takes a hit when his rim scoring regresses to the mean and his three shooting regresses far beyond the mean, to 18.8 percent. Also disheartening is the stat that 15.2 percent of Kemba's shots this quarter are blocked.

The third quarter shows a more stabile decline, with Walker's eFG% dropping about three percentage points. This quarter is when Kemba really pushes the rock to the hole, taking about 38 percent of his field goal attempts in the quarter at the rim. However, the hoop isn't so kind to him on these shots, only permitting 47.2 percent of these shots to fall within the iron circle. What these stats won't say is that Walker also gets to the rim the most in this period. Yet for better or worse, this is accompanied by a sudden drop in shots in that 16-feet to three-point line range. These are not the highest percentage shots for many players - Walker included - but they are fairly high percentage for Walker, who shoots 46.7 percent from that distance (average on the season, not just for third quarters). Though the first two quarters saw 22 and 23 attempts in this zone, respectively, the third quarter has played host to only 14 shots here even though his FG% is the same. This may be a zero-sum game, considering the trade-off for more free throws. Unfortunately for his shooting percentages, Kemba also takes more threes in this quarter, missing roughly 74 percent of them. This can especially be a problem when they account for about 25 percent of his shots in the quarter.

Walker's scoring doesn't get better in the fourth, except for his three shooting which has risen to a fine 40 percent. The really bad news is that despite taking 38.3 percent of his shots in the quarter at the rim (the highest percentage of any quarter), Kemba makes only 42 percent of them - a far cry from his incredible rim scoring at the beginning of games. The percentage of his shots coming in his least efficient distance (3 to 9 feet) rises to its peak in the fourth quarter as well, despite the fact that Walker only 30 percent of these shots. His shots from the 16-feet to three-point line are still well-below his first half rates, but alas - the fourth has his worst shooting from this range. And even with his best three-point shooting of any quarter, the attempts here account for the lowest percentage of his shot attempts of the four quarters.

So What Does It Mean?

Though this was engendered from the analysis of a single player, this issue is hardly the result of that sole player's actions. Assuredly, some of this decline is due to Walker, but analysis of a player in a season cannot exist in a vacuum without context.

Of course, it just makes simple common sense that some of this may be due in part to fatigue. I have yet to encounter an athlete that gets less tired as a game goes on. It's also worth making a mental note that the Bobcats play from behind more than any team. It snuck up on us because of their hot start, but the Bobcats have the worst scoring margin after one quarter, after the first half, after three quarters and after the game has finished.

Plunging deeper into this, I looked at more game tape than an e-wheelbarrow can possibly carry. Some of it was insightful, some not so much.

Constantly playing from behind and being your team's best scoring option is a breeding ground for shot selection forced by desperation. With Walker's offense so reliant on getting to the rim yet so weak on outside shooting, teams adjust and increasingly defend penetration as the game wears on. And so come the barrage of threes in the third and ill-advised one man army drives to the paint. In this way, Walker chooses poor shots in his desperation when the offense relies upon his shoulders because Ben Gordon isn't masquerading as Reggie Miller or because Ramon Sessions is sloppier than a frat star on Thirsty Thursdays. This can be compounded by teammates moving off-ball willy-nilly just trying to get anything going.

The difference between fourth-quarter Kemba Walker, the often self-imploding one man army, and first-quarter Kemba Walker, the human form of Nibbler from Futurama, is due to shot selection as well as the faults of the team. Kemba does pick his spots well in first quarters, but a lot of it is because the spacing is better in the first quarter. To this point, you can see Kemba getting into the paint in early quarters and the big defenders are late in closing on him, giving him the room for a floater or runner. Spacing is perhaps the most vital part of the NBA offense, or heck, the basketball offense, period. This isn't that simple, really, because spacing or lack thereof can benefit either way. Clumping your off-ball players on one side can open the offense in isolation or make for simpler passing lanes on the pick and roll between ballhandler and roll man. Or it can make life really hard for the ballhandler, who has to keep those other defenders in mind when his teammates move. Good offensive spacing requires the defense knowing it can't leave one player too much, whether because they're a strong scorer or offensive rebounder or screen setter, whatever.

But because the Bobcats are so young, this is a weakness. They often lose focus of this or misread plays. In one play against the Hawks recently, Walker ran the pick and roll with Mullens. The big defender didn't hedge and instead decided to defend against Walker's penetration rather than trying to trap Walker on the high screen. He backed as Walker drove, and then Walker stopped and pump faked to get him in the air. But just then, Mullens had decided to roll towards the hoop, right past Walker - bringing Walker's original defender right back to him to contest the shot. The spacing collapsed and the contested shot clanged off the rim. Rather, Mullens should have rolled to the basket in the opposite direction.

This is important in transition, too. The transition offense has been a strong point for Kemba, who makes 54.3 percent of his shots on the move (per MySynergySports.com), especially in the first quarter. Much of the early transition plays have shown to be simpler matchups, usually one-on-one or one-on-two. Walker's vertical gifts and brilliance to use his body to make space for layups make him a great weapon at the rim, notably in transition. Even against two players, Walker has the ability to outwit their defensive efforts and make highly contested shots at the hoop.

However, later in games, Walker becomes more brazen with taking the ball to the rim, knowing the necessity to score whenever possible to knock points off the deficit. Unfortunately, these are often times the Bobcats are most disorganized. In the picture below, I've noted how three Bobcats are essentially occupying the same fast break path (the red line). Kemba is driving slightly to the left. The two wings are on the wrong path in order to best preserve offensive spacing to give Kemba the best shot and/or to open themselves up for better shots on the perimeter. In fast breaks, the two wings are generally supposed to stay wide (blue arrows indicate these paths). This makes for better passing lanes, thus increasing the chance to score. This play had little chance. With Kemba going hard to the rack, the other wings should not have stuck so tightly together or Kemba shouldn't have raced into the paint and instead waited for the offense to set up in the halfcourt. Instead, it resulted in a wasted possession. 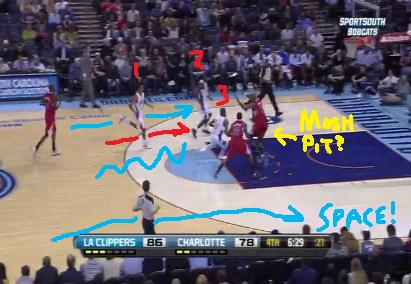 Among other things I noticed, the Bobcats run some nice stagger double screens on occasion when they get Walker the ball off the screens. It opens up the floor for penetration and confuses the defense which then has to compensate for being out of position as the speedster drives to the paint. The Bobcats and Walker also key off of ball movement, which keeps their spacing strong and the defense's spacing open for dribble-drive penetration. That's pretty obvious, but the ball movement they resign to sometimes are exercises in futility when inside ball movement is halted.

For all the weaknesses that Walker's scoring endures as games go on, they cannot be vanquished on just his own efforts. The team is young and will continue to encounter these problems, but for them to improve their offense (which, I might add, is hardly the largest of their issues right now), the rest of the team must maintain their focus throughout the games to flourish. From offensive spacing to panicky shot selection and lack of ball movement, the Bobcats would be wise to help themselves and their rising point guard with a more complete team effort of concentration.

All stats compiled from MySynergySports.com, Basketball-Reference.com and ESPN.com's game play-by-play