Bobcats vs. Lakers: breaking down the final play

Let's take a peek at the Bobcats' last possiesion against the Laker, what do you say?

Share All sharing options for: Bobcats vs. Lakers: breaking down the final play

The Bobcats are down one point. Thankfully, there's about 21 seconds left so the Bobcats don't have to face the dastardly nightmare of theirs that is inbounding the ball in congestion. Kemba Walker receives the ball and walks up the right side of the court. 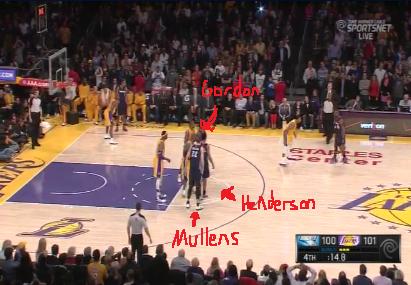 While Gordon acts as a decoy for a possible downscreen, Henderson and Mullens set a double screen on Darius Morris, thereby switching Kobe Byrant onto Walker. Kobe is by no means the same defender he once was, but he's not awful either. 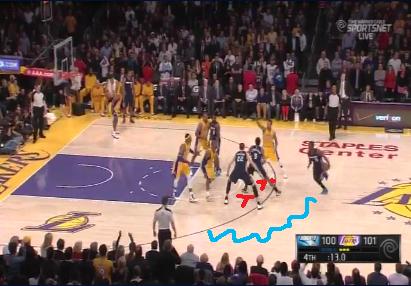 This gets Walker to the weak side of the court and clears space for an isolation while using the time available make this space. Kemba goes left and pull Kobe with him, now on an isolation play. Dwight Howard keeps watch, knowing with the bunching up top that he has the help to ease towards the paint without giving up much defensive coverage on his man, Mullens. 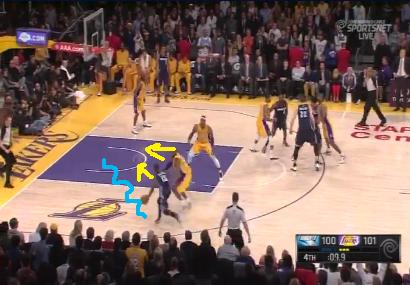 Kemba turns the corner and starts moving past Bryant with Howard watching and waiting. Note how the three Bobcats up top have Morris unaware at the elbow and Metta World Peace behind Henderson behind the three-point line. 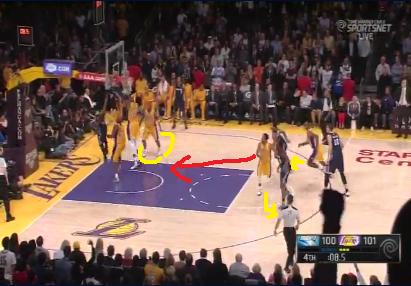 Walker tries to get the shot up over Bryant before Howard can reach the shot but it's too late and Howard swats it against the glass. Henderson recognizes the sudden availability of space for a rebound and cuts to the hoop with World Peace trailing a step behind. Morris is more concerned with Ben Gordon and sticks to him. Jodie Meeks is on the baseline, watching the ball as Ramon Sessions stands in the corner. 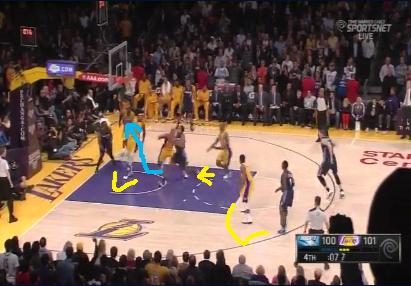 With Howard not recovered enough from his block to rebound the miss, Henderson catches it in stride and takes a step before launching for the layup attempt. World Peace is a good step and a half behind him now and only Jodie Meeks is close enough to provide a strong contest but Henderson is a step ahead of him too. Byron Mullens is now unguarded and cuts towards the basket to help rebound. 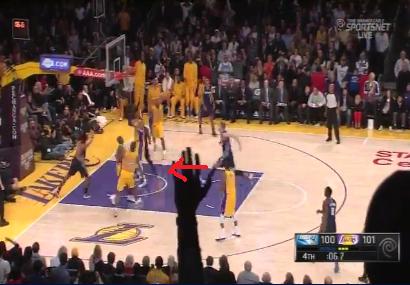 Oh no, but Henderson's layup rolls off the rim! Mullens is in prime position to slam home a put back dunk but the shot was a soft layup. The loose ball squeezes through a few players' fingertips, and as he pick it up for a quick shot, Kobe knocks it out of his mitts into the stratos. Amid more bobbling and goofed last-second predicaments, the ball winds up in the hands of Ben Gordon behind the arc with about a second to go. I'll let my final screengrab capture the moment and my analysis: 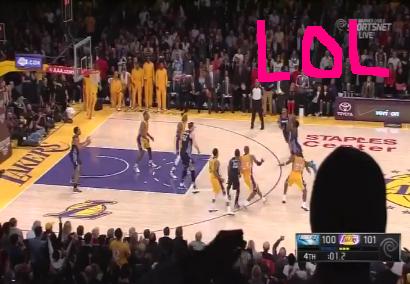