Portland is in an interesting and promising situation as a franchise. They already had LaMarcus Aldridge, arguably a top 20 player in the NBA, and brought back an improving Nicolas Batum. Wesley Matthews had a down season, but had previously performed well in earlier seasons. But they were also deciding to begin their own minor rebuilding process. So they traded away Gerald Wallace (for a first round pick), bid Greg Oden adieu and Brandon Roy retired.

Following a poor season, Portland was ready for a rebuild equipped with the No. 6 and No. 11 picks. They drafted Damian Lillard and Meyers Leonard.

While Leonard isn't playing too well (or too poorly, he's playing like a rookie big man, it would seem), Lillard has shown to be a talented point guard. He's scoring fairly well, especially as a jump-shooter. Lillard is making 41 percent of his threes and an impressive 53.3 percent of his shots from between 16-23 feet (link), but struggles finishing at the rim, making only 46 percent of some of the most efficient shots on the court. For comparison's sake, Kemba Walker is shooting 52.7 percent at the rim. 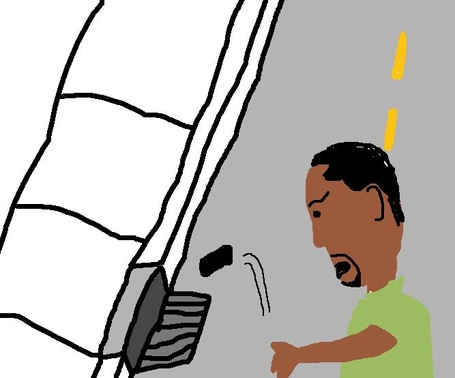 Gerald Henderson's iPhone slips out of his hands and through the sewer grate.