The Bobcats and Points in the Paint

Share All sharing options for: The Bobcats and Points in the Paint

It's no secret that the Bobcats are not world-beaters in the paint on either side of the ball. On the season, they've averaged 35.6 points in the paint while opponents average 47.7. The Bobcats' scoring in the paint (which I'll abbreviate as PIP from here on out) ranks 28th in the NBA, ahead of only the Boston Celtics (!!!) and the New Jersey Nets.

Before we hit the jump and we'll delve into some analysis of these duos' strengths and weaknesses, take into account the following: these PIP analyses are not directly indicative of solely the pairings' or each players' defense. Many times the faltering in interior defense originates from perimeter defense. But more often than not, high PIP correlates with poor ability to defend in the post and poor help defense, or the responsibilities of the frontcourt in most cases. Just bear in mind that the shortcomings do not mean to leave perimeter defenders completely without blame.

This PF-C combination has the best record of any pairing at 2-5, which doesn't mean much considering the sample size and the outlier that was Boris Diaw's early level of play. They scored just slightly above the season average in the paint, yet the 36 PIP was a smaller percentage of the team's total points. This can probably be attributed to better shooting all around, taking into consideration the team FG% during this span was 44.5 percent compared to the season average 41.8 percent. At the time, Diaw was like a pudgy LeBron, taking his offense inside and out, driving into the lane, pulling the defense to its edges, passing well and rebounding way above his average. White, also a versatile power forward (though without the range, passing and ballhandling of Diaw), was scoring pretty efficiently, extending his range to about 18 feet. It should also be noted that the opponents they played have a winning percentage of 59 percent as of February 18, 2012.

Defensively, things were not so encouraging. Diaw's a decent defender in the post because he holds his ground pretty well and doesn't bite on fakes much, but he's not great at denying his opponent room for an entry pass and he lacks the athleticism that would make him a better shotblocker and help defender. White has similar weaknesses but isn't as solid a post defender. Opposing teams' PIP as a percentage of total points is lower than the average, but the Bobcats were giving up 106.7 points per game at the time.

Then came the first implementation of the Gana Diop as a starting center movement, to the chagrin of many. Diop was still overweight and out of shape, and yes, still a bad basketball player. Diop's offense is limited to short offensive rebound putbacks, open layups and ... that's about it. He often tries to show off his jump shot, but that's one of the worst things you want from your offense. The way he handles the ball, you'd think the basketball was filled with flubber. I saw him pass the ball to the back of a defender during one game this season. His offense was and is terrible. Boris Diaw, he who helped revive Kwame Brown's career, can't even help him. And the offensive liability showed. This frontcourt pairing scored the fewest PIP of any Bobcats frontcourt (33.4), though it would be one of the highest percentages of total points because the Bobcats offense as a whole was really awful, scoring 78 ppg during this period. The competition fell to a hair under a winning percentage of 52 percent.

This lineup was the best defensive lineup, which is like me picking my favorite colorway of Sketchers Shape-Ups. Diop's got a reputation for being a good defender, but frankly, he's just a very tall guy with long arms and mediocre timing. One-on-one, he's strong enough to be difficult to move, but he's slow-footed and reads an opponent poorly; people he defends average a PER of 22 against him (per 82games.com). But as a safety-type player, he's a tree and forces opponents to think twice about their shot just because their shots might get in the way of his arms.

This combo is hardly worth spending words on. They played only two games together, dropping one to Atlanta by 30 and the other to the Pistons by 17. Byron Mullens entered the starting lineup after a strong run scoring off the bench in the previous games. In these two games, Mullens would score well, but much of his offense came from long twos, as we see every game. In addition to having good range, Mullens also has pretty good hands. He is decent on pick and rolls and finishes at the rim at about par for the course. That said, he's not comfortable with his back to the goal and has extreme difficulty creating his own shot. Diaw didn't help the PIP offense at all, taking six total shots over the two games, three of which were three-point attempts. He hit one FG and one free throw for three points. Woof.

Hoooooo boy. The duo helped allow a whopping 52 PIP average, which amounted to about half of their opponents' respective total points. I'm sure most of us know Mullens' defensive faults, so I'll try to keep this brief. He gets outmuscled for post positioning fairly easily, doesn't read pick and rolls well, plays bad help defense, is a weak rebounder and isn't good at blocking shots despite very good length and athletcism.

After Diaw's terrible play got him yanked from the starting lineup, Tyrus Thomas inherited the position (and seemingly the quality of play) with Derrick Brown moving into the starting SF slot. Due to Tyrus Thomas' weight loss, he no longer has the bulk and strength to play power forward. As such, he relies on his jump shot more than ever. Thomas gets to the rim for a career low 1.4 attempts per game, despite his second-highest season minutes per game. Further, he's taking a career high number of shot attempts from between 16 and 23 feet, making only 26 percent (HoopData.com). Obviously much of this is because he's played so much at small forward, but he's hardly been crashing the glass as a power forward either. Mullens' play was up and down during this time, not scoring as much or as efficiently as before. But the team did score more in the paint, mostly due to Gerald Henderson's increasing tendency to drive to the hoop prior to injury. Because the Bobcats' big men are, for the most part, inept at scoring in the post, they rely on slashing guards and cutting players to get points against the opposing interior defense.

Defensively, this was not a great match. Tyrus Thomas is not strong enough to hold his position and easily gets bullied in the post. He is a decent help defender, however. His rebounding is at an all-time low, which is probably because -- you guessed it! -- a lack of strength to fight for necessary rebounding positioning. Byron Mullens' defense remained unchanged and as porous as ever. Opponents scored over 48 PIP for about 49 percent of their total points. By the way, the winning percentage of teams during the 'Mullens as a starter' era was about 46 percent.

The team struggled mightily to score in the paint during this time. Biyombo's a better player on offense than many imagined, but he still is no Zach Randolph. He finishes at the rim decently well, has an OK hook shot and can score off offensive rebounds, but his hands are still not quite as soft as you'd want them to be. Above all that I've just written, though, he's still just a rookie and will develop as he plays more. Diaw's play has dropped considerably since the beginning of the season, doing nothing as well as he was performing then. Passes are sloppier, dribbling more loose, shots less consistent and less aggressive. Just all around inconsistent mediocrity from Diaw. Without Henderson and Augustin, the Bobcats continue to struggle scoring in the paint, and this frontcourt certainly hasn't picked up the slack. Maggette's return has brought back some, however. The PIP as a percentage of total points is a good bit decreased despite a small drop in team scoring, but also because outside scoring is increasing with the return of Reggie Williams, as well as Maggette, and relying on Kemba to score.

Hardly an immovable wall, this frontcourt duo does hold opponents to the second-fewest PIP/game, though not by much. This range of games also saw an increase in difficulty, with average opponents' winning percentage up to about 54 percent. Anyway, Biyombo's still learning and tends to bite on pump fakes in the post good bit, but is better than he was at not fouling. His help defense is the best on the team, which you can especially note during last night's game against the Raptors, in which he has seven blocks. And you can also see him force opponents to change their shots at the last second, forcing a jump pass, or ill-advised shot. It will be interesting to see how he progresses on defense as the season wears on and the Bobcats (knock on wood) regain the rest of their starting lineup from injury.

I think the best option is this last one. Biyombo's improving and should continue to do so on both ends of the court. Sure, Diaw is inconsistent, but I like him beside Biyombo to switch on power forwards and centers and on offense to help distribute the ball and stretch the interior defense. With Augustin back and Henderson returning soon, the Bobcats should have their best starting lineup on the court, and a decent backup squad led by Walker and Williams.

For your own reference purposes, here is the spreadsheet I made. Here's a key: "Team PIP A" = "Team Points in Paint Average"; "By FC" = "by frontcourt pairing";"w 3 reg st" = "with three regular starters," ie. with Augustin, Henderson and Maggette. 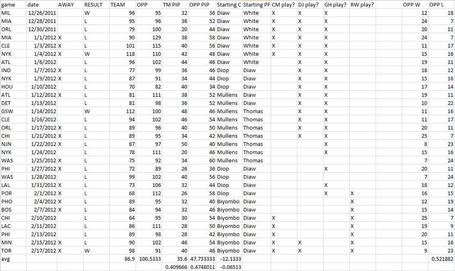 Points in the paint stats retrieved from ESPN.com box scores.