Share All sharing options for: Bobcats Crushed by Pacers 108-73

I'm not sure how to start this recap except maybe going deep into a forest and yelling into the heavens. The last time the Bobcats lost this bad (to the Trail Blazers, you may recall), I wrote a deep introspective into my mind during the game. Sorry, I can't do that tonight. I hardly want to relive any of that again. If you want that, go to my twitter (warning: quite profane) and travel back in time to during the game.

I mean, what can I say? It was the type of basketball game that makes you wish your team went out for cigarettes and none of them came back. 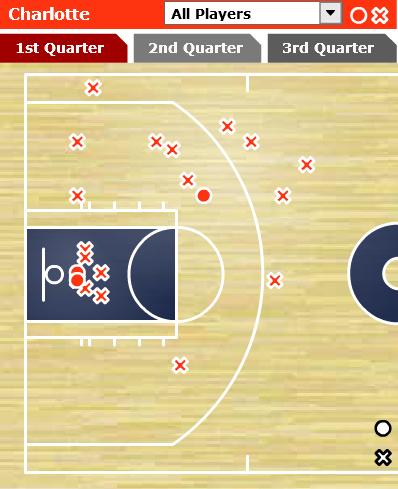 They had two -- count 'em, TWO! -- points up until 2:56 left in the quarter. Until the Reggie Williams dunk to double their points, the Bobcats had shot 1-for-17 on field goal attempts. They were bloodied in the paint and had many of their shots rejected. And when they had open jumpers, they just couldn't sink them. Defensively, the floodgates weren't exactly open, but the Pacers easily found an offensive flow through the paint and Hibbert, whose size and length gave Biyombo fits. Hibbert was strong in the paint and showed nice touch throughout the night, missing only one shot in the game. The Bobcats finished the first quarter and played a good bit of the second quarter close, making up a ton of ground on the Pacers. The reserves played much better than the starters, mostly because of pace. Kemba Walker led the way pushing the tempo and scoring a few times on the pick and roll. His passing's getting better, especially in transition when you can really see him find awesome angles. Derrick Brown also played quite well, running the floor and finishing at the hoop.

And then the starters came back and it all went to hell in a handbasket. Corey Maggette slows the pace of the team considerably, which is dreadful against a team like the Pacers in which their halfcourt defense is so good. And so the Bobcats regressed. Ball movement slowed to a standstill and the Pacers lead leaped from seven all the way to 20 by halftime.

And then it only got worse from there. Paul Silas proceeded to put in DeSagana Diop for extended minutes for reasons that I can only assume were "HE IS TALL AND HAS ARMS". Yet, he was no more effective in defending Hibbert or the paint. I have few words about Diop tonight that aren't curse words.

Here's one series on offense that I can recall: Gana Diop receives the ball a little outside of the right elbow, maybe 18 feet out. HOLD UP! AWW SNAPPPP IT'S A GANA DIOP PUMP FAKE! Oh man, I can't believe his defender, playing a good four feet off him, didn't fall for it! So Diop proceeds to drive, with the defender forcing him baseline. Ruh roh, Gana! You don't have the ball-handling to maneuver baseline, better pass. Whoops, while you were dribbling at the pace of tectonic plates moving, the shot clock had wound down and it expired as you passed the ball. Wah wah waaaaaahhhhhh.

Oh my god, Paul, just an awful player sub. The Bobcats needed to play up-tempo to have a chance tonight. That means Gana Diop cannot see the floor much at all. He was slow as ever and didn't record a single block or play solid help defense. I did enjoy watching Diop play the pick and roll on offense and look to Augustin as if he were about to receive a pass from D.J. Ha. Haha. Hahahahahahahahaha. What did Diop do better than Biyombo? At least Biyombo can play help defense and he plays within his limits better on offense. One concern I did have about Biyombo came after a dropped Diaw pass in traffic after Diaw drew two defenders in the paint. Sure, Diaw's pass wasn't perfectly placed to Biyombo's chest, but Biyombo got his hands to the ball. It's concerning how often I've noticed Biyombo drop passes like this.

And so the dead-in-the-water Bobcats proceeded to end the third quarter down 40 points. Through three quarters, D.J. Augustin had a +/- of -44, Corey Maggette -39, Boris Diaw and Reggie Williams each with -32. Pitiful. And can we talk about Diaw? Nah, forget that. He's hardly worth the words. He's looking more and more disinterested on defense and can't hit a shot to save his life, when he even is aggressive enough to take them.

The fourth quarter was all garbage time and the Bobcats made up five points. Little was worth notice during this time outside of a miraculous three-pointer from Cory Higgins.

Awful. Disgraceful. What a departure from what we saw against the Raptors.