Game Overview: I'm actually looking forward to this game. The Rockets will be closer to the Bobcats' level with Kyle Lowry out and perhaps without Kevin Martin and Terrence Williams. This evens the playing field on the perimeter with Gerald Henderson now matched up with Courtney Lee and D.J. Augustin against Goran Dragic. Luis Scola becomes the major threat in this lineup who can put the hurt on Tyrus Thomas in the post. Dragic won't be an easy contain either because of his quickness and Augustin's lack thereof on defense.

Key Matchup: Corey Maggette vs. Chandler Parsons -- Parsons has quietly risen in the ranks in Houston, now the starting small forward. I saw him work out for the Bobcats, and he's a lot more versatile than I remember. Not just a range shooter, he can also drive to the rim and throw it down (see McGee, JaVale and Ibaka, Serge). Allowing him to have a big game could be the Bobcats' downfall. 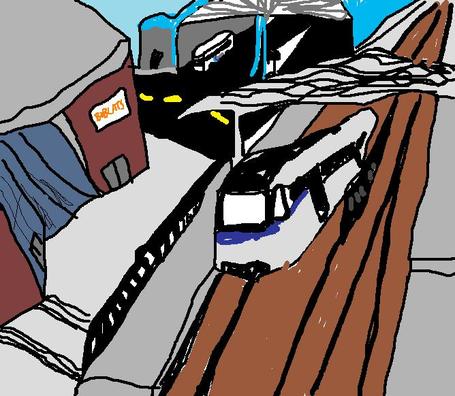 It's Time Warner Cable Arena as seen from on top of a ladder near the light rail station!