Game Overview: This game marks the 17th time these two teams have played each other this season, I think. Or something. Philadelphia's roster slightly improved at the trade deadline by trading for Sam Young, but we've yet to see him be incorporated seamlessly into their rotations. I also believe this will be the first game of the season that Spencer Hawes will play against Charlotte after injuries kept him sidelined previously. The 76ers are also currently on a three-game skid, dropping their last game to Chicago after being outscored by the Derrick Rose-less Bulls 51-36 in the second half. Facing a more all-around solid scoring attack, the Bobcats can't afford to be lazy in any aspect on defense tonight. Well, they can't afford to do that at all on offense either. And shoot, they can't afford to be lazy at all any night of the week.

Update: Rick Bonnell reports Corey Maggette is out tonight sick and with nagging back problems. Silas says Reggie Williams is likely to start.

Key Matchup: Corey Maggette vs. Andre Iguodala -- Iguodala is possibly the best perimeter defender in the game right now and Corey Maggette is the best Bobcats scoring threat. I think you can see where I'm going with this. 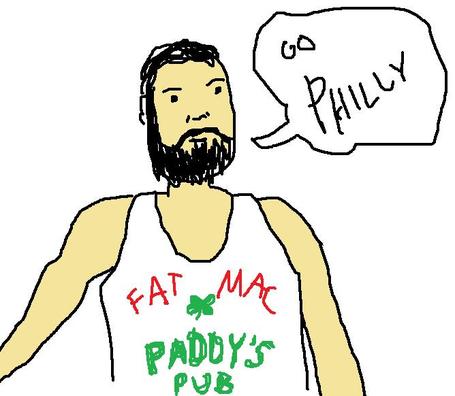 It's Fat Mac from It's Always Sunny in Philadelphia!