"Coffee And TV" - Blur (via emimusic)

Game Overview: The Nuggets are riding high from the solid play of Fat Lever, who is absolutely killing it and racking up triple-doubles like I eat grits. Which is a lot. Because grits are great. Go grits. But grits aren't a meal on their own. You need shrimp or bacon or something. Denver's shrimp is Alex English. And the bacon is Michael Adams. I love this team. They're scoring a zillion point per minute oh my god yes.

Well that sucks. This year's Nuggets aren't nearly as cool. I mean, they're still pretty cool. Kenneth Faried is like a super dunk machine. Did I ever tell you about the time I saw him at a draft workout and we both wore the same shoes? Good times, good times. Ty Lawson is continuing to develop as a point guard, upping his assists despite a slight decrease in shooting percentages (especially at the three). Sadly, Nene was traded to Washington, robbing the Wizards of their most Wizard-y player. But JaVale will now have to adjust to a team with more of a winning attitude. Tough boogers, kid. Unfortunately, the winning is kind of falling lately. They lost to Toronto the other night. I suspect it's partially due to injuries (especially, Gallinari) and trying to mesh new personnel, including signing Wilson Chandler from China.

Key Matchup: Kemba Walker vs. Ty Lawson -- DANGER, WILL ROBINSON, DANGER! Didja see what Luke RIdnour did to the Bobcats' pick and roll and perimeter defense last game? I swear, Bobcats TV announcer Steve Martin was going to jump on the court himself to stop Ridnour. We will hopefully see some better defense from Walker and PnR defense to stop the ball tonight, but lol, who am I kidding. Good luck everyone! Hope your dreams alive!

Ben Draws Something in Microsoft Paint 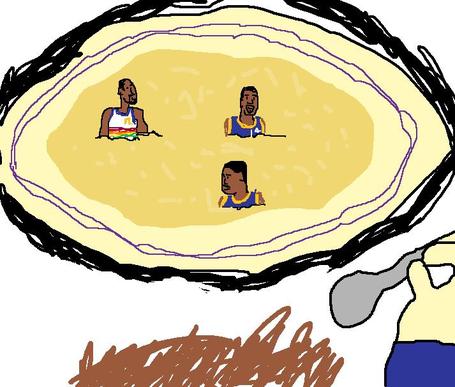 (Clockwise, from left:) It's the Fat Lever, Michael Adams, and Alex English in a bowl of grits!