Share All sharing options for: Bobcats Can't Keep Up, Fall to Nuggets 99-88

There is quite a lot of history linking the Charlotte and Denver NBA franchises. Prior to tonight's game the Bobcats TV network ran through a nice recap. The ABA's Carolina Cougars advanced to the playoffs in their final two years under the leadership of coaches Larry Brown and Doug Moe, both former players from the University of North Carolina.

After the 1974 season the Cougars moved to St. Louis and Brown and Moe moved on to Denver to take on the Nuggets who then drafted Bobby Jones of North Carolina. The very next season North Carolina State's David Thompson signed with the Nuggets. And then in 1976 the Nuggets moved to the NBA and signed Paul Silas who is, I'm assuming, No. 35 in this picture: 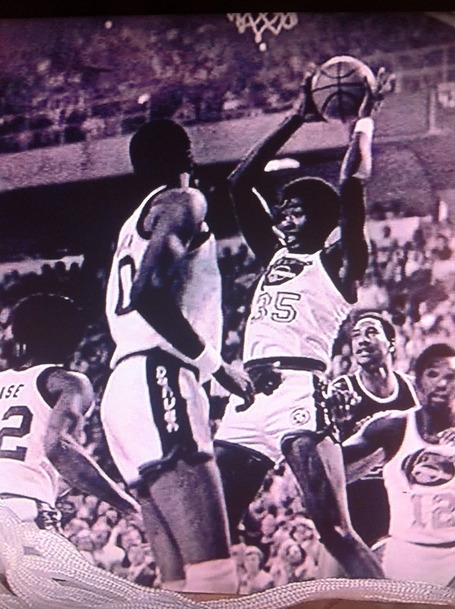 Throw in the fact that Nuggets head coach George Karl and starting point guard Ty Lawson both attended North Carolina and there was no shortage of history between these two franchises and the area.

Oh, and the Bobcats were wearing their Cougars Hardwood Classics uniforms tonight. I think it's unanimous that no one would be upset if they just went to these permanently. So all in all, good work by the Bobcats TV crew to piece all of that together.

Now, on to the game.

The Bobcats got off to a hot start scoring on three early jump shots including two threes from Corey Maggette. If you’ve paid attention this year this was both exciting and terrifying because the Bobcats can easily fall in love with jumpers. No legitimate shots in the paint were even attempted before the first timeout at the 9:39 mark of the first quarter. With JaVale McGee, Wilson Chandler and Kenneth Faried Denver threw out one of the more athletic front courts the Bobcats have seen. And Faried and McGee did what they should have done and attacked the basket often and getting an early, if questionable, foul on Bismack Biyombo.

Still, behind those three early jumpers plus one more from D.J. Augustin the Bobcats were up 10-7 with 7:38 to go. Another three from Maggette made it a six-point lead, but the Nuggets kept attacking and getting to the line. Yet, the Bobcats kept hitting.

When I say Charlotte fell in love with the jumpers I mean it fell head over heels. Fortunately the outside shots were going in, Gerald Henderson got in on the act drilling a three mid way through the first and the Bobcats had hit on four of their first five shots from beyond the arc. And the Nuggets kept attacking...there is a theme here. With a point like Lawson and guys who can run the floor in Faried and McGee, Denver is an exciting and dangerous team, one that is tough to put away. Charlotte could not have played much better from a production standpoint on offense, yet only led by 3 with a minute to go in the first. There was little effort to attack the basket, but Charlotte was hitting open shots. Charlotte shot 67% from three in the first hitting four, and Denver made not a one but trailed by only five.

The second quarter was more of the same, although the Bobcats did try and get a few more shots in the paint. But the Nuggets seemed to be scoring with much more ease. Sharp cuts and precise passes foiled the Bobcats on more than one occasion. Nothing complicated, just decided offensive movement and execution. Kemba Walker fronted the entry pass on two consecutive possessions in the second and made two steals, although the Nuggets recovered the first for an easy lob dunk (naturally). Biyombo had difficulty staying with McGee especially when guys like Lawson and savvy veteran Andre Miller were feeding the Denver big man.

Towards the middle of the third quarter the game got away from the Bobcats a little bit. A couple of technical fouls on Augustin and Maggette illustrated the frustration on this night from Charlotte. Truthfully, it probably illustrates frustration from the season as whole. It’s incredibly hard for these guys to keep going through this night in and night out. If you’re reading this, you’re probably among the handful of people who have watched every Bobcats game this season, brother. It’s exhausting. And that’s just watching it! It’s tough to begrudge these guys for having a lot of frustration and for just being ready to get this season over with.

But, to this group’s credit (the group that remains on the roster right now), they’re still playing. There is a distinct difference between a team that is battling for a playoff spot and one that is the only team on the league yet to win ten games. The guys remaining on this roster are playing and these games of late have at least been within reach.

I hope that someone shows Biyombo tape of Faried after this game. Faried does a great job of using his body and position to get rebounds. Biyombo is incredibly gifted but he’s rebounding on pure athletic ability right now, simply out jumping and out reaching those around him to snare boards. But he’s still being pushed off balance far too often, even when he’s not being pushed. Faried is fantastic at finding a man when the shot goes up, getting low with his hands up and elbows out, making contact and then leveraging his position to be in a spot to react to how the ball comes off the rim. He’s also ridiculously athletic so it’s not just great technique but if Biyombo can learn a little from that he’ll be a tremendous rebounder. Faried also outsprints most guys on the court just about every time.

As not pretty as the third quarter was, the Bobcats were still down just eight to start the final quarter. After hitting four triples in the first quarter Charlotte hit just one over the next two quarters and just only 25% from the field in the third. After three, Denver had outscored Charlotte in the paint by 20, 42-22. Still, Charlotte was only down five after a Reggie Williams three-point play with a little over nine minutes to go.

Corey Maggette went down in the second half of this game with a strained Achilles tendon, which is not great. Maggette had 19 points tonight and has been Charlotte’s most effective and consistent scorer. Still, at this point you can’t help but think it might serve this team to play the young guys as much as possible.

This game was well within striking distance for Charlotte. With less than five minutes to go Charlotte was still down just six. Down the stretch Lawson got into the lane entirely too easy, but that’s what Lawson does. His quickness is a problem for just about everyone point guard in the league. This game was never out of reach completely, but the Bobcats could never quite get over the hump. The points in the paint were demoralizing. Denver scored 58 points in the paint tonight eclipsing the Cats by 20. Charlotte played well enough offensively but its patented third quarter swoon reared its ugly head.

The Bobcats did have four players in double figures led by 21 points (albeit on 20 shots) from Gerald Henderson. Walker (11), Williams (15) and Maggette with his 19 led Charlotte but it wasn’t enough as the Cats fell again 99-88.