Game Overview: The streak of losing has hit 13 and the list of possibly winnable games is quickly dwindling. The Pistons are beatable if the Bobcats can put together a strong performance, but, yeah, it's the Bobcats. The other Pistons-Bobcats games have ended with mixed results: a 17-point loss, a 15-point loss and most recently, a 3-point loss in OT. So it's possible. But it's also possible Charlotte gets blown to kingdom come by a bad team.

Also, this will be the last game Ben Wallace plays against the Bobcats. Ever. He's retiring after the season. Which makes me really sad, because I loved his game from his prime so much. And we share the same first name.

Key Matchup: Bismack Biyombo vs Greg Monroe -- because this will be my first time watching the Cats in a week or so, and I could really use a strong performance by Biyombo to raise my hopes. 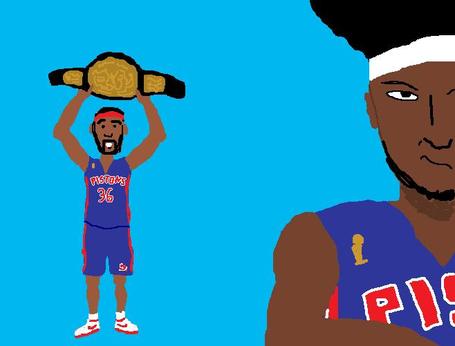 It's Sheed (with his championship belt) and Ben!