"They Are Night Zombies!! They Are Neighbors!! The Have Come Back From The Dead!! Ahhhh!" - Sufjan Stevens (via AlexxTruscTV)

Game Overview: As the saying goes, Go Big Or Go Home. And the Bobcats look to have somehow struck a compromise between the two, raising their losing streak to 20 but within days, their season will come to a merciful end. If they want to avoid making history, they need to either grasp victory from the jaws of defeat tonight or against Orlando or New York later in the week. This may be their best shot remaining, though a Dwight-less Magic team might be an interesting matchup.

To win tonight, look for Jamario Moon to go off for two points.

(I decided to change up the pace today for some fun) 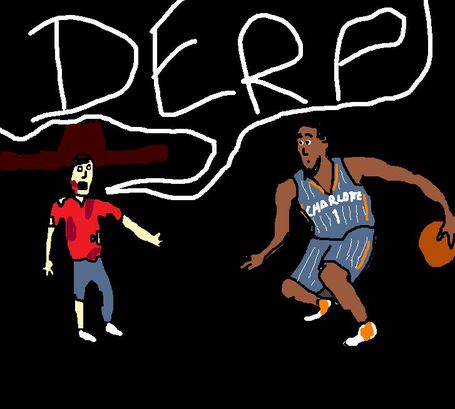 It's Kemba Walker and Carl as a zombie from The Walking Dead and HIS STUPID EFFING HAT.