"Born Under A Bad Sign" - Albert King (via killerclam)

Get with the Three Kings, suckers.

Game Overview: Guess what? The Bobcats are on a winning streak! OK, they're on a winning streak against the Toronto Raptors. Still, Charlotte's beaten Toronto in the last six games they've played. The last time the Raptors beat the Bobcats? March 29, 2010. And the stars are aligning to give the Bobcats a chance to once again go for a season sweep of the Raptors. I have work tonight so it's possible Charlotte wins.

Kemba Walker is getting the start over D.J. Augustin, who has looked extremely mediocre for a while now. This should come as no surprise. Augustin has not been able to score well and is more turnover-prone than usual. Walker isn't quite a dynamic scorer either, but he's shown much improvement as a passer, doesn't turn over the ball much and isn't afraid to put the screws to the opponent with his scoring ability.

The rest of the starting lineup will probably fill out as it did against the Pistons: Henderson, Williams, Mullens, Biyombo. The key to stopping DeRozan, who can be Toronto's most electric scorer, is to keep him out of the paint. DeRozan makes nearly 60 percent of his shots at the rim, but his numbers significantly drop off in the midrange, especially if he's forced into shots between the baseline and either elbow. As for their other major scoring threat, Andrea Bargnani, he's having a major down year with his shooting range from the long twos and three balls. He's also not great shooting baseline jumpers.

Key Matchup: Kemba Walker vs. Jose Calderon -- Calderon's pretty bad defensively, so it would certainly help if Kemba could take advantage of Calderon's weakness to be taken off the dribble, whether that's as a scoring threat or opening passing lanes with ease. But on the other side of things, Calderon's also one of the best facilitators in the league and rarely turns the ball over. He's not exceptionally quick, but he's smart and is a great passer. 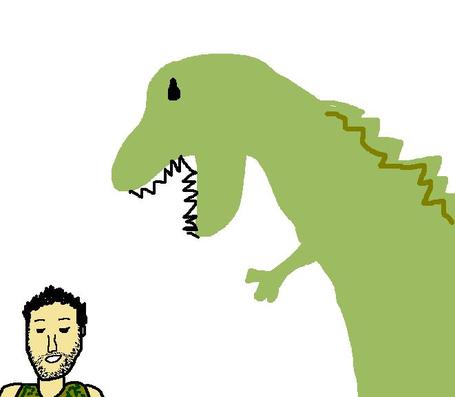 It's Andrea Bargnani and a Tyrannosaurus Rex! Let's hope those camo jerseys work!