Game Overview: Tough loss last night, eh? Welp, we got another game tonight! Woo, back-to-back away games! This one's against the Hawks, who are 438-0 this season against the Bobcats. OK, the record is really 2-0. Whatever. The first one was close-fought and the Bobcats lost in OT, while the second one was a 30-point drubbing.

The Hawks are doing pretty decent lately, dropping a few games to Philly, Chicago and Milwaukee but beating the Knicks and Utah. Josh Smith put on quite the show against Philadelphia with 34 points on 18 shots, 9 rebounds, 5 assists, 2 steals, 1 block, though he did foul out. Joe Johnson has quietly been quite solid, recording 21 ppg, 4 apg, 4.7 rpg, with 48 percent shooting in the past 10 games.

Key Matchup: Reggie Williams vs. Joe Johnson -- Last time around Joe Johnson was matched up against Tyrus Thomas and killed him early by running around screens while Thomas couldn't seem to figure out that hey, there's a guy in my way. Williams is a bit more mobile though and should be able to defend this a little better. Maybe? Otherwise it may be RIP Bobcats. 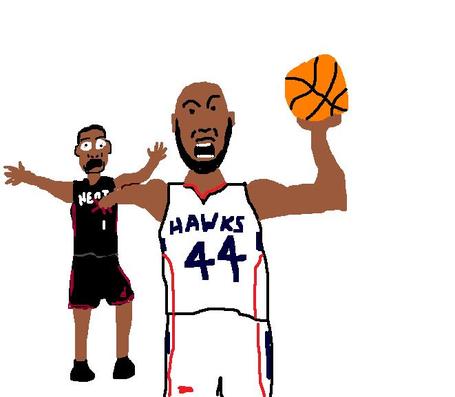 It's Ivan Johnson! Gotta use the Mola Ram Rebounding Style!