A Season in Review: Centers

Share All sharing options for: A Season in Review: Centers

They say the two most important positions in basketball are the point guard and the center. They also say the true center is fading away into oblivion. They say a lot of things, but point guard and center were two spots of great intrigue this year for the Bobcats. On top of those firsts two revelations, you had both first-round draft picks playing these spots. Along with Kemba Walker at point, Bismack Biyombo made his NBA debut this year. He played some at power forward and center.

The post positions were like a game of musical chairs for Paul Silas this year. In case the seven wins didn't indicate, I'm not sure if anything was ever really settled. But Biyombo and Mullens gave us some entertaining stretches. They both have plenty to work on this summer.

Once again I've assigned grades here. Once again I don't really love assigning grades. But, it seems to be a nice talking point if nothing else. "Hey, this guy is horrible at giving out grades." Stuff like that.

I'm grading on a curve of sorts thanks to those seven wins. So while it would certainly not be crazy to give everyone associated with the worst winning percentage in NBA history a hard F, I don't think that adequately judges how each player did this season. And also, they're totally subjective.

Perhaps one of the most intriguing picks from last year's NBA draft, Bismack Biyombo made a name for himself in the Nike Hoops Summit where he put up a triple-double going against the likely overall number one pick in the 2012 draft, Anthony Davis. Biyombo's wingspan, quickness, athleticism, and his ability to block shots had scouts drooling over his upside. That and the fact that his name is fun to say made him a player to watch in the 2011 draft.

The Bobcats made moves to acquire the rights to the pick from the Sacramento Kings, who drafted Biyombo with the seventh pick. Bobcats GM Rich Cho was said to be very high on the young player from the Democratic Republic of Congo, but a contract dispute with his Spanish team threatened to delay his arrival in Charlotte.

To the Bobcats' credit, they worked out a deal and Biyombo arrived to be with his new team for the entire season.

His was one of the more interesting story lines during the season and many nights one of the only reasons to tune in. To say not much was expected of Biyombo this year wouldn't be totally accurate, he was expected to play like a rookie and he did. He had nights where he looked completely lost and nights where he flashed the potential to be the defensive anchor on a very good team.

Biyombo had no training camp to speak of, and no real chance to even get to know his way around the arena before this shortened season kicked into gear. Couple that with the fact that he's the youngest player in the NBA, he's still learning the game of basketball and ups and downs were to be expected.

He struggled early with fouling way too much. While he gradually improved on that during the season, he still goes for too many shot fakes. But the strongest part of his game, his shot blocking, kind of lends itself to that especially for someone as inexperienced as he. Biyombo ranked eighth in the league in blocks and blocks per game. That skill definitely translated to the NBA level and once he learns a little more about positioning and timing he could really be a monster defending the paint.

He needs to make a giant leap in rebounding over the summer. He has all the skills and physical gifts to be very good on the boards, but too often found himself out of position, or not physical enough before the shot. A lot of times he'd be in position and simply moved out of the way. He should learn to use his base more and keep people from the rim as he plays more. The Bobcats certainly need all the help they can get rebounding the ball. They have no one in Top-50 in rebounding, rank second to last in the league as a team and Biyombo was statistically the best. It's been an area of concern for quite some time.

We knew his offensive game would be an adventure. In reality, it was better than some expected. He wasn't totally inept when the Bobcats had the ball. Sure, at times he was just completely out of place, utterly lost, spinning around like a top and had his head in a swivel...that's not a very good sales job by me. But we knew he had to work on that. There were nights where he didn't fumble every pass and he made clean catches with efficient power moves to the rim. He has a lot of work to do on his offensive game. It will be interesting to see what kind of progress he can make with a full off-season and preseason. Until then it's tough tell exactly how much he needs to improve to be a viable option with the ball, but we know it's a significant amount.

His large contract (he's owed $7.3 Million next year, third highest on the team) made him the target of amnesty rumors since the season started. He will be off the books after next year, and although it would free up that money to use the amnesty on him, unless the Bobcats actually have something to do with that money it wouldn't make sense to pull the trigger, so the theory goes.

Whether that changes this off season remains to be seen but certainly his will be one of the first names mentioned when anyone talks amnesty. He's a massive load inside, and in shape perhaps he could add something to a team. But he was nowhere near that this year.

Ohhhh, Byron Mullens...what a conundrum you were for Bobcats fans this year. Acquired in a trade with Oklahoma City (sorry dude) for a second round draft pick in 2013, Mullens was brought in because Charlotte had no big man depth at all. Mullens, a former first-round draft pick, was buried on the Thunder bench. The trade was a good gamble for Charlotte. First-round talent is tough to get and if you can take a shot on young player, especially when you have to, it pays to do so.

Mullens immediately showed what he could contribute to this team with early success shooting the ball from the outside. Being effective from the outside is fine, it's great even and being effective anywhere is a plus for Charlotte. But a lot of frustration in watching Mullens this year came from just how often he was taking those shots from outside.

Mullens shot 100 times over the course of the season between three and 15 feet from the rim. He shot 259 times (his most attempts from anywhere) from 16 feet out to the three-point line. Take a look at his shot chart from basketball-reference.com and you'll see shots littered around the outside of the paint and beyond. To be fair, he was better at shots ten feet and out than he was within nine feet, making just 30% of those close range attempts. And that's probably what he needs to work on the most on offense, getting a little more touch, being more of a presence when in close. Some of this has to do with the offense, and at times Mullens was playing the power forward spot instead of center. You can watch his game and tell he's more comfortable from the outside. 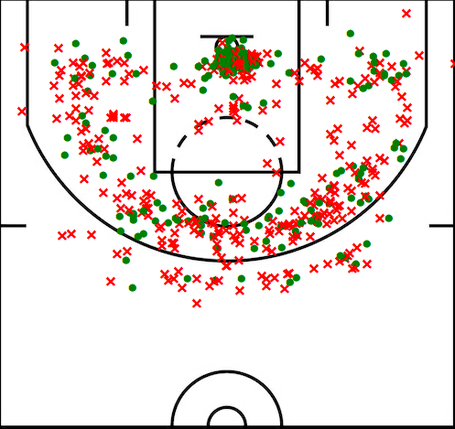 But you know what? Thank God he was out there to shoot these shots! He was one of, if not the best, offensive options the Bobcats had all year. Look at it this way, imagine this past season without Byron Mullens. (Good luck not rolling your eyes.) Yeah, your head just imploded didn't it?

The Bobcats couldn't exactly be choosy about where the points came from. He was the Bobcats most effective big man in a pick-and-pop situation because of that good outside jumper. If Charlotte was going to be horrible to watch, at least have someone out there who could hit a shot and Mullens could definitely do that.

What he could not do was play defense; this probably drew more ire than anything and certainly was a major frustration for the coaching staff. It seems to reason his poor defensive play kept him out of the starting lineup for some time. Mullens would often lose his man completely and forget to block out or be so badly out of position the effort was futile. The basic ability to see his man and the ball at all times was tough for Mullens it seemed.

The Bobcats were very bad, so it's tough for even a gifted defensive (or offensive) player to truly excel when the team itself is so flawed. Especially on defense, when shifts from one side of the court will affect movement on the other side, it's not totally fair to pick on Mullens solely for his failures on defense. But a lot of times the results were too obvious to point the finger anywhere else.

His help side defense was passable, when it resulted in a blindside block. He's seven feet tall for crying out loud he's going to get some blocks. However he commits all too often and completely to those blocks on occasion and the result was usually an easy two for the man he left. We were tough on Mullens during the year, and probably too much so.

He's a third-year player who spent one season in college and appeared in 26 games during his first two years, he's going to have some holes. There's no reason he can't learn to play defense at least well enough to contribute. Defense is as much about want-to as it is about skill. Mullens has skills and honestly he was one of the few bright spots for this team. Hopefully the new coaching staff can help him develop on that end of the floor.