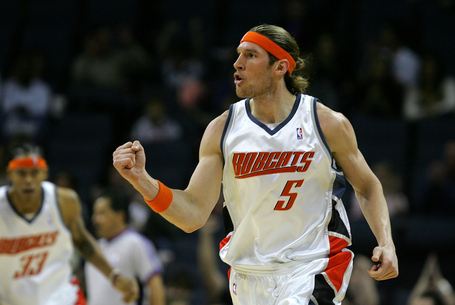 As a part of SB Nation Basketball's network-wide "Cult Classic" theme, I had the pleasure of going back and searching through the Bobcats fun eight-year history for popular, though undervalued, players. There are arguments to be made for plenty of the men that have worn the orange and weird greyish blue.

Gerald Wallace, even though the face of the team for years, could be called a cult love, seeing as how the Bobcats themselves are still more of a cult among fans to begin with. It was easy to love him, the way he earned his "Crash" nickname. There's already a Cult Of Biyombo. Cartier Martin was endearing in how much he devoted his time and effort to just earning his 10-day contracts, and eventually a deal for the remainder of the 2009 season. Shannon Brown could dunk really well. Earl Boykins was just a cute little fella. Flip Murray's name was fun and he could shoot. Jason Kapo-no-no-no! Kwame Brown had a resurgence in his year in Charlotte. And who could forget Shaun Livingston being the utter essence of a cool baller, even after a devastating knee injury from years ago. Matt Carroll was also quite popular for a while, but recently soured as his abilities decreased and his heavy contract weighed upon the Bobcats considerably.

But I think I have to go with Walter Herrmann.

His flame burned brightest late into his rookie season when he was 27 and then poof, he was traded with Primoz Brezec to Detroit for Nazr Mohammed. But as far as cult classics go, I'm not sure how you can beat a goofy, eccentric, ponytailed South American with a fun scoring touch and gigantic hands. 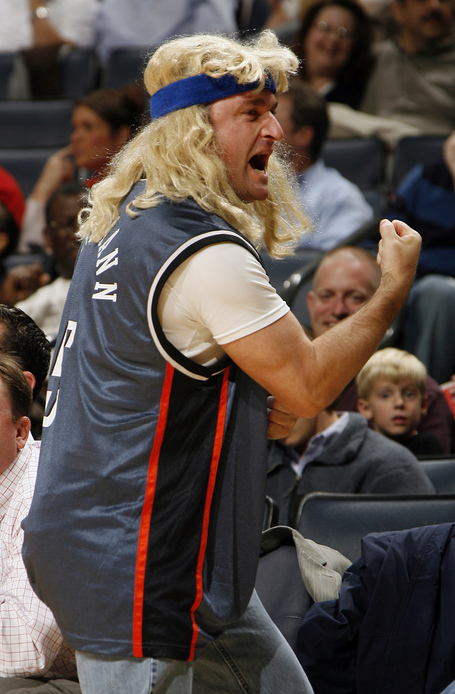 I remember when the Observer profiled him, featuring his giant paw print on the cover of the sports page. His golden hair flying every which way, he came to be nicknamed "Fabio" for his resemblance to the famed romance novel cover model.

A late-comer to the NBA, Herrmann found himself underutilized early on, with his minutes varying in and out. But he caught on late in the season, earning starts in each of the final twelve games and winning Eastern Conference Rookie of the Month.

And despite clear deficiencies on defense, his offense was extremely fun to watch. He could shoot the long ball (46.1%), he could finish at the rim (72 FG%), but more than that, he was a wild card with the ball. He was unconventional to say the least. Using his absurdly large hands, he would weave the ball while easily palming it.

Unfortunately, that chapter of the Walter Herrmann book ended far too soon and we never got to see Fabio reach the heights he hinted at. He did go on to make memorable plays in Detroit, but it was here where he began his short NBA career. Oh, and did I mention he made his return to basketball last year in a Bobcats jersey (kinda)?

Who's your Bobcats Cult Classic player?