As is customary in the NBA, the Charlotte Bobcats lost tonight. They lost to a team not much better than they, but showed little in the way of effort or desire. Just keeping the status quo.

Let it be known that Benjamin Swanson of Chapel Hill, North Carolina, is a butt-face. He claims I forgot to do a recap a few weeks ago. This isn't the truth. Still, he badgered me all day today because he's a jerky-douche. 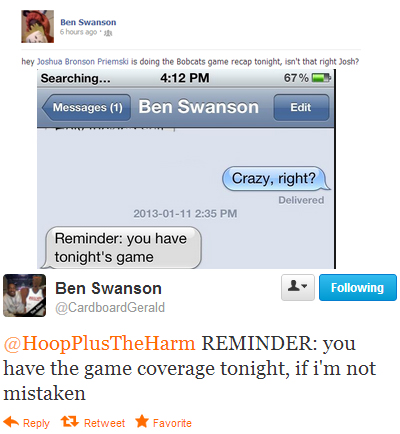 Yeah, he's a bum. Anyway, let's talk about the game.

Bobcats/Raptors games have always been fun, historically. Lots of dunks, heroics, and hustle plays. Everything seemed to indicate this game would be better than a harmonica when you're (I'm) drunk.

I mean, the Bobcats had (before tonight) won 10 of their last 13 games against the Raptors. I was pretty darn excited for this game.

Alas, it was anything but an entertaining game. In fact, it was the opposite. It was a brutal loss.

Let's start with some numbers.

Not a big deal, though. I bet the Bobcats stopped Toronto from scoring any second-chance buckets, right? What's that? They allowed the Raptors to score 22 second-chance points? Oh.

Quite frankly, the Bobcats looked disinterested tonight. Maybe they were in awe of the Raptors' 3D signs or something. I don't know what it was, but they looked lackadaisical and disorganized. Moving on.

I'm searching for some sort of silver lining. Give me a second.

Tonight, we saw Desagana Diop play point-center. He dished out a whopping two assists, tied for second-most on the team. Diop was reminiscent of Magic Johnson in his prime tonight. The ever-impressive Diop filled out his stat line with one rebound and one personal foul. Good effort, Diop. You showed those dinos how it's done.

As much as I enjoyed mocking Diop, I brought him up because I want to talk about something: passing. As I just mentioned, Diop was tied for second-most assists tonight, with two. That's a problem, and one the Bobcats have been facing all year. They're dead-last in assists per game this season, at 19.4.

I know it's become cool to trash Dunlap and blame him for the team's struggles, and I'd be lying if I said he didn't have some influence in this. However, the problem is a bit deeper than that.

Look at the Bobcats' roster for a second. Do you see any players you'd consider decent play-makers? I don't. Not a single one. They're all shot-first players, and they're playing in a system that demands passes be made to open guys on the perimeter and under the basket. Left to their own devices (the Bobcats' dribble-drive offense is essentially a guideline, not a strict set), the Bobcats resort to what they know - isolations.

And that's what we saw tonight. A ton of isolations and terrible shots. Kemba Walker driving into three defenders and throwing up a wild layup, Ramon Sessions doing the same, Brendan Haywood isolating in the post when two help defenders are waiting for him to drop-step into the lane, Henderson finding a contested midrange jumper...ugh.

The Bobcats uncharacteristically grabbed 15 offensive rebounds tonight and only scored nine second-chance points on 3-13 shooting. So, given a second chance, and potentially an opportunity to change what wasn't working, the Bobcats continued to isolate.

Whatever. We're used to this.

What is concerning, however, is that the Bobcats aren't good defensively. Their personnel suggests they're good on that end, but they're not. Too many times did Michael Kidd-Gilchrist lose Landry Fields on the perimeter, or Biyombo lose his man, who'd cut baseline for a wide-open dunk.

And it's not even like the Bobcats played zone tonight! I believe they played zone for three possessions in the third quarter. That's it. So what gives?

I watch a lot of Raptors games, and I don't think I've seen them dunk as much as they did tonight in a game, like, ever. The Bobcats' defense has to get better. As I've said, a lot of it does fall on Dunlap, but more of it falls on the players.

Over the last few games, the Bobcats do not look like a team. They're playing more iso-ball than usual, not boxing out, and not getting back or communicating on defense. It's ugly. They've seemingly lost all desire to win. Dunlap can only motivate them so much. They need to motivate each other, and most importantly, themselves.

Until they do, the losses will continue to pile up. Not all that bad, considering the goal is to get a good draft pick. But jeeze, at least make these games competitive.