The Bobcats held off a strong comeback attempt by the Orlando Magic to end their losing streak.

Share All sharing options for: Bobcats hold on to defeat Magic 106-100

Hi, I'm Jameson Draper. I'm one of the new members on Rufus On Fire, and you'll be seeing me do a little bit of stuff here and there. What a way to start off my Bobcats blogging career...an actual win!

Tonight, the Bobcats won the game primarily because of the play of the guards. Gerald Henderson went 8-11 with 17 points, Kemba Walker went 8-16 with 25 points and Ramon Sessions came off the bench going for 15 points, 12 of them coming in the 4th quarter.

Right out of the gates, the Bobcats looked like they had a legitimate chance at coming away with a win. After being tied 28-28 after the first quarter, they found themselves up 57-45 at halftime. Henderson and Walker led the way with 17 and 16 points. Hakim Warrick also came out of the first half with 7 points. When you get players like Warrick to play well, it's just like icing on the cake.

Whatever Dunlap said at halftime, though, must' have not been inspirational or moving at all. With the exception of Ramon Sessions, the Bobcats looked pretty flat the entire third quarter, getting outscored 26-19. Despite shooting 68.2% from the field the rest of the game, the Henderson-Walker point guard combination shot 20% in the second half, racking up a combined 3 points. The Bobcats' leading scorer in the 3rd quarter was Hakim Warrick with 6 points. I said having Hakim Warrick do well was icing on the cake for Charlotte, but having him playing the best on the team is not good for the team. Because that means they're playing poorly.

In the fourth quarter, the Bobcats rekindled the energy they had throughout the first half, persevering and eventually pulling away with the win.

Although Gerald Henderson had 17 points after the 3rd quarter, he didn't play one minute of the fourth. In his place was Ramon Sessions, who scored 12 of his 15 points. Henderson had a solid night, but his back "locked up" and prevented him from returning to the game. Later he would tell Rick Bonnell he aggravated his back problem (a bulging disk he first injured during his Duke years) earlier in the game, but only later knew he couldn't come without risking himself further and more dangerously. Sessions did just about as well has he could have done.

Tonight, Kemba Walker continued to redeem himself for his nightmarish 25% field goal shooting performance against the Celtics on Monday, shooting 50%. For those of you than can't do math, Kemba Walker was like 300 times better tonight. 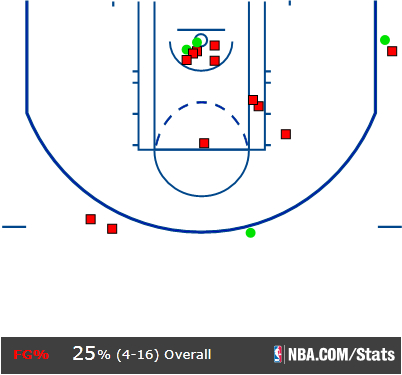 This was Kemba's awful shooting game. We see that he missed a LOT of shots in the paint, and couldn't get any of his pull-up jumpers to go. 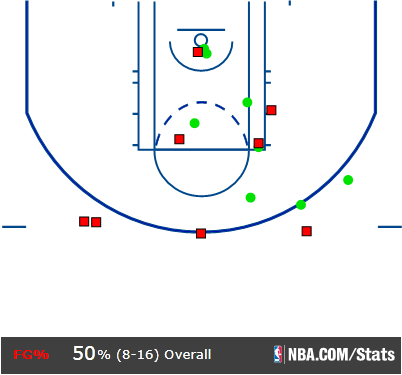 This was Kemba's game tonight, in which he played really well. He didn't try to force it inside so much, which got rid of a lot of missed shots. He also got most of his pull-up jumpers to fall and was a bit better from beyond the arc.

Kemba Walker and the Bobcats backcourt are the keys to wins. Tonight, Henderson, Walker and Sessions played really well, giving the Bobcats the victory.