Breaking down small ball in Atlanta

How well did the Bobcats' small lineup fare against the Hawks? Pretty well, I'd say.

Share All sharing options for: Breaking down small ball in Atlanta

A while back, I wrote about how the Bobcats should throw caution into the wind and try to play really small lineups to get as much out of their backcourt as possible.

It doesn't happen nearly as much as I'd like to see, but Dunlap does use it on occasion. In fact, we got a quick couple glimpses of these lineups last night.

Most of it came in the second quarter, when we saw two similar lineups on the court in succession. The first was Kemba Walker, Ben Gordon, Jeffery Taylor, Michael Kidd-Gilchrist and Bismack Biyombo. The second swapped Gordon for Gerald Henderson. With Atlanta missing major pieces of their frontcourt, this game should have seen lots of small ball lineups from Charlotte to get them into transition more. With the help of MySynergySports.com ere I'll look at two of the most intriguing lineups comprised of the Bobcats' youngest players.

It didn't start too well. The Bobcats' play broke down, resulting in Gordon dumping it to MKG at the right elbow. Kidd-Gilchrist tried to pull up for a jump shot over Josh Smith, but Smith deflected it. On defense, they defended the strong side hard to try and force traps. On this first play, the Hawks kicked out and swung the ball on the perimeter to get an open three for DeShawn Stevenson, who missed.

As the Bobcats tried to take the rebound and push it on a fast break, Ben Gordon threw a hail mary right into the hands of Kyle Korver. It wasn't even close.

On the ensuing play, Atlanta ran a pick and roll with Ivan Johnson, who successfully got deep position and scored in the post off of it in traffic.

Back on offense, Jeffery Taylor drove a few steps and found a cutting Biyombo, whose defender had come out to meet Taylor in the paint. But Biyombo went for the dunk as Josh Smith came from the weak side to defend. I couldn't tell for sure, but it looked like Smith got a piece of it. Regardless, he changed the shot and Biyombo missed what could have just as easily been an easy layup. 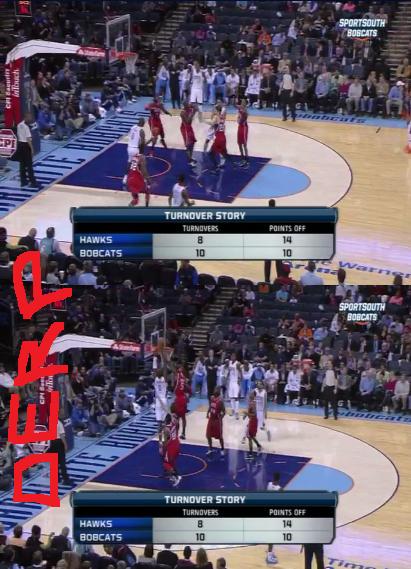 Biyombo then got his own rebound, missed the immediate hook shot, and batted the offensive rebound back out to the perimeter. With a quick pass, the Bobcats found Kemba Walker for three as the Hawks defense scrambled to reset.

Jeff Teague drew a foul on their next play down the court, but after missing his second free throw, the Bobcats pushed the rock in transition with Kemba finding Jeffery Taylor for the alley-oop over three defenders. 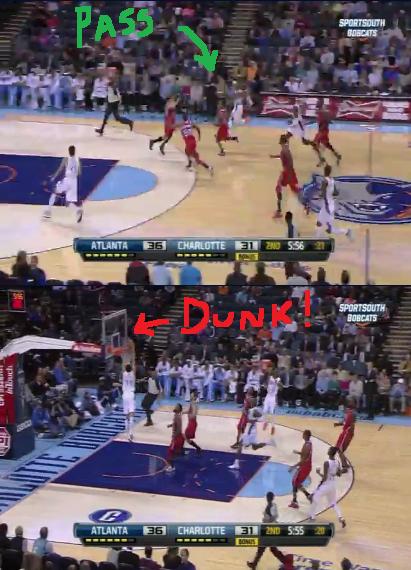 Following this, Atlanta got the ball to Josh Smith in the post. He could not finish from deep on the left block, but Ivan Johnson picked up his miss and then got the ball slapped out of his hands as he went up for a shot in the fray.

The Bobcats once again got into transition and were able to get position down low. Jeffery Taylor drove down the middle and got the ball to MKG on the right block. Kidd-Gilchrist maneuvered around Korver with ease, and got fouled as he went up for the layup between Korver and Josh Smith. He made both free throws.

Dunlap swapped out Gordon for Henderson here, and the first play was a solid defensive stand as the Hawks only mustered a contested long shot attempt from Smith that caromed off the rim.

With a chance to take the lead, the Bobcats got a good look. Biyombo set a pick on DeShawn Stevenson to help Henderson get in the lane. With a hop step, Henderson got up for a layup. But as it was about to come off the rim, Biyombo tapped it while it was still partly in the cyclinder. Let's take a look at the reactions to that offensive interference. 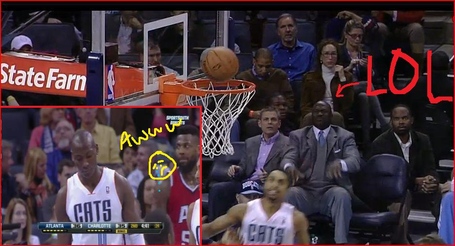 Anyway, moving on. Josh Smith rebounded a Jeff Teague miss and got the putback layup. Kemba missed a leaner bank jump shot from left of the paint trying to draw contact. In transition, the Hawks swung the ball on the perimeter to find Stevenson open for three, but he bricked it. Biyombo couldn't handle the offensive rebound as Smith tapped the ball as it reached Biyombo's hands and Ivan Johnson was able to grab the loose ball. After a non shooting foul, Smith got the ball deep in the paint but couldn't find a shot amongst the bodies. But he found an open Korver from three, kicked it out to him and swish.

On the other end of the court, Taylor nailed a contested three over Korver.

After a Josh Smith jumper, Henderson drove and drew multiple defenders. He kicked the ball out to Walker, who took the wide open three. He missed, but the soft landing on the rim led right into Biyombo's hands. He quickly went back up with the ball for the dunk.

The Hawks answered with a Korver three, having taken advantage of the Bobcats' doubling on the strong side. They quickly passed out and the Bobcats' weak side rotation was late, leading to the open jumper.

Henderson took Korver easily on the next play, getting around Korver's slow footwork to drive for the layup over Korver. After a missed John Jenkins three, Jeffery Taylor finished a tough layup in transition against multiple defenders, cutting the deficit to two points.

Atlanta quickly inbounded the ball and got into transition, finding Ivan Johnson already next to the rim. He caught the underside of the rim on his attempt but got his own rebound and kicked it out. John Jenkins missed the following shot but the ball bounced into a dead zone and the Hawks recovered possession again, leading to a Josh Smith and-one dunk. Smith missed his free throw but Taylor bobbled the rebound back to Smith, who found Korver from three before the defense could adjust. And just like that it went from 46-44 to 51-44.

Michael Kidd-Gilchrist missed an open jumper and the Hawks turned the ball over shortly afterwards, resulting in a Kemba Walker one-man fastbreak and-one (though he missed the free throw).

So what did we learn?

Perhaps the Atlanta Hawks' lineup was just very well-suited to be matched up with a small lineup. But regardless, I'd like to see more of these kinds of lineups. They defended decently well, outside of the occasional three, and they got into transition a good bit. There were some bad goofs on the defensive rebounding side of things that really bit them in the butt, but these are very young lineups comprised of two rookies and two sophomores. When your oldest player on the court is Gerald Henderson or Ben Gordon, you're not going to be the most polished group. Some better communication and more solid effort on the defensive boards could have went a long way here, though.

The Bobcats later went back to a small-ish lineup late in the game with Walker, Ramon Sessions, Gordon, Jeff Adrien and Biyombo. However, the Hawks shut it down with Josh Smith's strong play and Jannero Pargo hitting some shots to close it out.

In all, when the Bobcats' frontcourt is as shallow as it is and the backcourt is as deep as it is on offense, you don't have many options. Either you go conventional and hope for miracles or you play your best players and try to take opponents out of their rhythms with the unconventional.