How not to play defense, part one

It seems like every time I recap a game, I complain about the Bobcats' defensive inefficiency. In what will surely be a multi-part series, we're going to look at a single defensive possession and figure out what went wrong.

Share All sharing options for: How not to play defense, part one

Yesterday, the Charlotte Bobcats lost to the Chicago Bulls.

But that's not why we're here. We're here because the Bobcats can't play defense. I watched most of last night's game, and saw one defensive possession that blew my mind. Let's get into it. 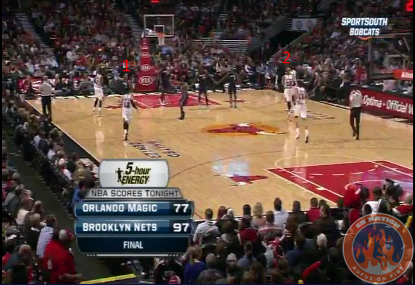 The first thing I want you to notice is that the Bobcats are inexplicably playing a 3-2 zone. How can you tell so early in a possession? The Bobcats are standing in zones, and aren't matched up with individual players. Simple enough, right?

Now, focus on Ramon Sessions (labeled with a "1"). Sessions is pointing at Jimmy Butler because he's leaving Sessions' zone. It's Bismack Biyombo's responsibility to cover Butler if he continues to move toward the baseline. We'll see what happens in a bit.

Secondly, check out the strong side of the court. Three Bulls, one Bobcat. This is why zone defense is a poor decision against most NBA teams. All you have to do to defeat the zone is load the strong side and attack the middle. This can be hindered, but it's difficult. Moving on. 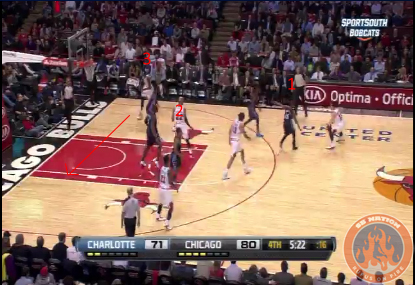 Take a look at Kemba. He's telling Ben Gordon to stay in his zone. A smart decision. Kemba should be able to handle Kirk Hinrich one-on-one. If Hinrich were to move closer to the sideline, however, Gordon would be expected to pick him up.

Sessions just told Biz to keep an eye on Jimmy Butler. For whatever reason, Biz is watching the ball. Yes, Bismack Biyombo is worried that Kirk Hinrich will penetrate the defense. Lord knows why. Butler is wide open, and no one's watching him.

Lastly, notice that Luol Deng is cutting baseline. No Bobcat notices this.

Noah's coming up to set a screen... 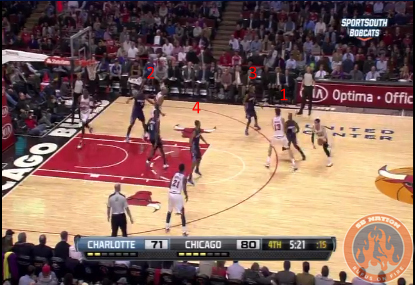 ...and boom, the defense is compromised.

First, Kemba is caught on a great pick from Noah, with no help in sight. Usually, teams will go under picks in the zone, especially so far from the basket. Kemba decides to go over it. Not sure why, but whatever.

Next, we see that Michael Kidd-Gilchrist notices Deng, and does a decent job covering both Taj Gibson and Deng as both are in his zone. Excellent work from the rookie. As Deng continues along the baseline, he should become Biz's responsibility. Still, Biz is watching the ball and protecting the high post, which is what Sessions is doing too. Three Bobcats within five feet of one another. Terrible spacing.

Ah, Ben Gordon (3). Gordon is doing nothing at this point. He's standing around because no one's in his area. He should be communicating what's happening to his teammates. But he's not.

And lastly, Sessions. Sessions is ever so slightly helping on the pick, but hasn't committed to stopping Hinrich, nor to keeping an eye on Jimmy Butler. He's not helping anyone right now. 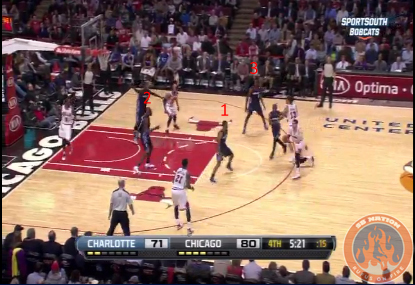 Sessions, you silly man. Sessions has finally committed to Hinrich, but he's way too late. Ideally, you'd like to see him rush Hinrich and prevent an easy pass. Unfortunately, Sessions is just standing there, as if he expects Hinrich to pull up from 20 feet.

Check out Biyombo. Still watching the ball, still unaware that Deng is right behind him. If Butler had better awareness on offense, he'd touch-pass to Deng under the basket for a layup.

Ah, Ben Gordon. Still doing nothing for the team.

At this point, it's too late. The Bulls are about to score. The Bobcats, if they were a good defensive team, would break the zone here and rotate heavily to cover everyone, as seen below. 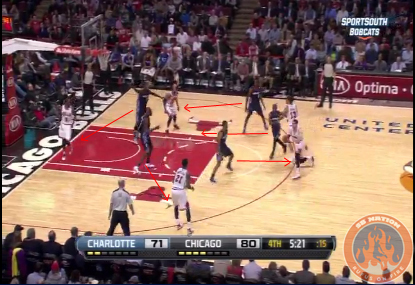 The first thing you'd need to do is stop Butler, who's about to receive a pass. This would be Biyombo's responsibility. Deng is still under the net, so MKG would need to break from Gibson, and Gordon would have to rush down to the post to front him. Next, you'd like to see Kemba follow Noah as he rolls to the basket to prevent any easy scores. Lastly, Sessions needs to fully commit to Hinrich. None of this happens, by the way, but this is what a good defensive team would do. Communicate, break the zone, and rotate quickly. 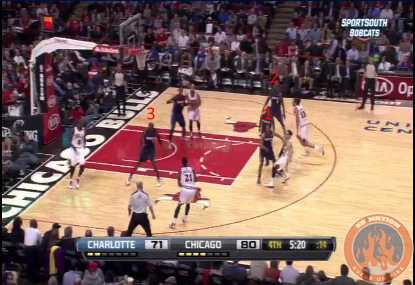 And here we go. Sessions has FINALLY committed to Hinrich, but it's doing nothing. He's watching Butler take a jumper. Excellent work, Ramon.

Ben Gordon is still standing around. Hasn't done anything on defense this possession. Not a single thing.

And lastly, Biyombo. Biz is standing around, still watching the ball. Granted, watching the ball is what he should be doing now, but it's too late. Butler's pulling up for an easy, wide-open jumper. He makes it, by the way. (In fact, if you watch the video, Biz commits to Deng, as if Butler will pass up an open jumper for a guarded Deng.)

If there was a video clip with audio, you'd notice one more thing. The only person that verbally communicated on defense this possession was Kemba Walker. Communication is CRUCIAL to a zone defense's success. Ball-watching and standing in your zone does nothing positive, and yet that's what the Bobcats have been doing.

I have nothing against the zone if it's run properly. However, the Bobcats don't. I've been blessed enough to watch one of the better zone teams in the NBA the past two seasons, the Raptors. I can't stress how different these two teams are when playing the exact same type of defense. The Bobcats NEED to communicate on defense, especially in the zone. They need to be quick, they need to commit, and they need to rotate with purpose.

Until they do, expect a lot of plays like the one we just looked at.