In our season preview, we take a look at the Bobcats' new additions and how the team's prospective developments might play out this year.

It's our turn to preview the Bobcats in SB Nation's ongoing NBA season previews! Can you taste the season?  CAN YOU FEEL THE LEATHER (not of the basketball, but of fashion-forward players who wear leather sweatpants).

1. What significant moves were made during the offseason? 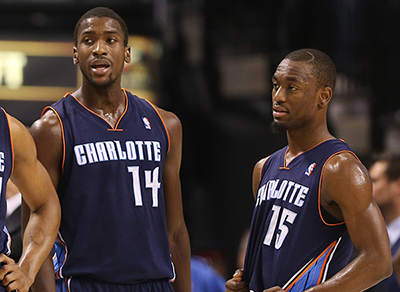 Where do I begin? This was without a doubt the most eventful offseason in the Bobcats' short history. They of course once again had a top-five draft pick and used it to shock fans and analysts alike on draft day in taking Cody Zeller. Then they amnestied Tyrus Thomas, who was on a lengthy and massive contract and frustrated fans with his disappointing play in recent years that plummeted from his initial year on the team.

The Bobcats subsequently used the cap space that opened to sign Al Jefferson (3 years/$41.5 million witha player option for the last year), who immediately becomes the most talented offensive frontcourt player in team history. The Cats also re-signed Josh McRoberts (2 years/$5.5 million) and brought aboard Anthony Tolliver (1 year/veteran minimum). Byron Mullens, who started for half of the season, was not offered a qualifying offer from the team that would have made him a restricted free agent. After a lengthy negotiation process, Gerald Henderson agreed to re-sign with the team (3 years/$18 million with a player option for the last year). Phew.

2. What are the team's biggest strengths?

This is a weird thing to think about after watching two years of the Bobcats having almost no strengths. I think their biggest strength will be offensive balance. Last year the Bobcats' offense was extremely dependent on the backcourt to create and finish the offense on the shoulders of Kemba Walker, Ramon Sessions, Gerald Henderson and Ben Gordon. With Al Jefferson and Cody Zeller revitalizing the frontcourt offensive versatility, defense won't be able to key on perimeter penetration to stop the Bobcats' offense. With greater offensive spacing, the Bobcats should be able to have a much improved scoring balance to create inside-out ball movement that can spread the rock around the floor. The team is lacking in shooters still, so it's not going to be all bubblegum and shooting stars and invincible ball movement for open shots, but it will be their best weapon.

3. What are the team's biggest weaknesses?

Defense. Team defense can minimize the effects of weak individual defense, but the projected starting frontcourt lineup of Cody Zeller and Al Jefferson is going to really struggle defending the rim. Zeller has great size and quickness but struggled in college dealing with contact and challenging shots. Jefferson is slow-footed and has been exploited for years by opponents in the pick and roll. His defense is better when defending a player close to the rim as opposed to defending on the move, but it's still poor and he's an underwhelming shotblocker. With a poor interior defense, the team will need to be able to rotate very well and understand angles of the rotations in regards to passing lanes or the rest of the defense will collapse and open up long range shots.

4. What are the goals for the team?

Get out of the cellar. The Bobcats are clearly tired of putting a terrible product on the floor and have grown confident in their young players and trying to attract talent in free agency. They're likely not a playoff team, but they should be winning more with a better offense.

I leafed through an NBA preview magazine at the grocery store the other day and saw they had estimated the Bobcats to win fewer games than last season. How the fart do you lose more games without Byron Mullens and Tyrus Thomas playing significant minutes? I just don't see that happening. They'll probably still be in the lottery, but the new roster should help the development of the young core while not maxing out too soon in a win now mode.

5. Are the Bobcats trying to abandon the rebuilding process too soon?

On the eve of the most anticipated draft class since Sports Illustrated put LeBron James shirtless in a cornfield for their magazine, people are fairly wondering if they've made the move away from tanking too soon.

Tanking is painful and the lottery and the draft is a crapshoot, but getting a great draft pick in what should be a loaded draft class might be worth in in the long term process. On the other hand, the Bobcats need to be able to attract decent free agents and you don't do that starting Byron Mullens for 41 games.

Still, the Bobcats did not completely take out all their rebuilding-through-the-draft eggs from the basket. They could have three first-round picks in 2014 depending on themselves, the Pistons and the Trail Blazers' performance. They have plenty of assets to make moves that can add to the team's long term value through the draft even after spending the big bucks on Al Jefferson.