Steve Clifford was not pleased with his team's effort in what turned out to be a costly third quarter in Monday's 103-94 loss to the Atlanta Hawks.

Share All sharing options for: Hawks vs Bobcats: Steve Clifford not pleased with 3rd quarter effort

Charlotte Bobcats head coach Steve Clifford was not pleased with his team's effort coming out of halftime Monday night and predictably so. The Bobcats were outscored 34-16 in the third Monday night which erased an eight point lead and had Clifford questioning their effort.

"We came in the third quarter with absolutely no energy, and that was obviously the difference in the game,"

Clifford also called into question his team's defense against Atlanta point guard Jeff Teague who finished with 14 points and a game-high 12 assists.

"It's disappointing. We need to do a lot better than that."

To be fair, it wasn't just the defense that hurt Charlotte. They made just 6-of-18 shots in the third and turned the ball over six times. Those turnovers got Atlanta into transition and led directly to 12 points. The shot chart from the period shows several chances from in close that were not cashed in. 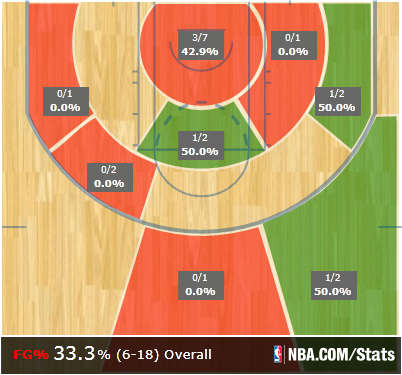 More from Rufus on Fire: