The Bobcats travel to Madison Square Garden to take on the New York Knicks. The biggest question is how the Bobcats will bounce back after their horrible showing in New Orleans.

Al Jefferson is reportedly out for the game tonight and that can't be good. The Bobcats struggled mightily against the Pelicans, constantly getting blocked at the rim and they could not score inside at all. Now the Cats get to go against former Defensive Player of the Year in Tyson Chandler and I'm not sure that it's going to be that much better.

If the Bobcats are going to win tonight they have to shoot better. They cant do what they did against the Pelicans and allow the defense to just sit inside on them all night. That means somebody needs to work on getting some points from the perimeter or even the midrange. Steve Clifford needs to make this easier on the team. The Bobcats opened up against the Pelicans in iso sets. Don't let the team do that if he can help it. Have them start with some pick and rolls and off-ball screens. Something to get some open shots.

The interior defense needs to better. Here's the shot chart from the game against the Pelicans. 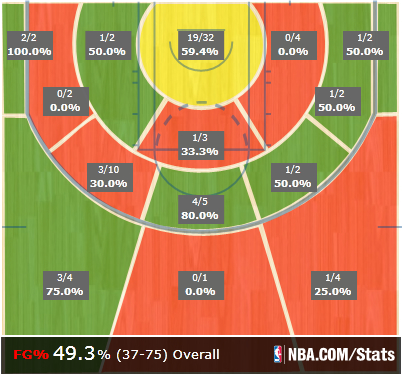 Look at all those shots at the rim. If that's going to happen you have to contest it better or just force the ball out somehow. If they play that kind of interior defense on the Knicks then Carmelo Anthony's bully ball style of play will eat them alive. Melo might be notorious for jumpshots but he loves to go down low and create offense in the post.

A matchup to watch tonight will be Gerald Henderson/Jeff Taylor vs Iman Shumpert. Both have been in a very bad funk to start the season and it won't be easy to turn that around against Shumpert, a terrific perimeter defender, so it will be interesting to see how the two players handle Shumpert's play on them.

Both teams are coming off losses so both will be looking to have a bounce back tonight. The Knicks should be the heavy favorites as they have the better players, better matchups, and an idea of what they want to do. However the Knicks have looked sloppy to start the season so I'm willing to give the Bobcats a puncher's chance.