A few nights ago against the Pelicans the Bobcats had an absolutely horrible showing. One of their main issues was their interior defense was dreadful.

Share All sharing options for: Digging into the Bobcats' interior defense's problems

You can't be a good NBA team without a solid interior defense. It just doesn't work. Sure, you can win some games off mismatches and by sheer hustle but if you can't defend the rim consistently then you're going to get exploited defensively and lose a lot. The Bobcats have had mixed showings against teams that have had various amounts of success in the paint. They beat the Cavaliers, the second-worst team in field goal percentage within five feet of the basket thus far. Their other wins came against the Knicks, a middling team in scoring performance deep in the paint that lost their best big man early in the game, and the Raptors, who shoot about as well as New York in that range. The Rockets sport a very good percentage from this distance, and the Bobcats did well holding them back as long as they could before stumbling in the last quarter.

But the other night against the Pelicans, who have the worst shooting percentage within five feet of the basket, the Bobcats got beat down low and were punished for it in the form of a blowout. Lets see what exactly they did wrong.

The team is definitely giving effort down low, that much can be said. After all, it would be very bad if the team had already quit on defense this early into the season. Still, they seem to be easily confused, especially when someone gets screened.

Lets start off here where we have Anthony Davis at the top of the right elbow with the ball in his hands. 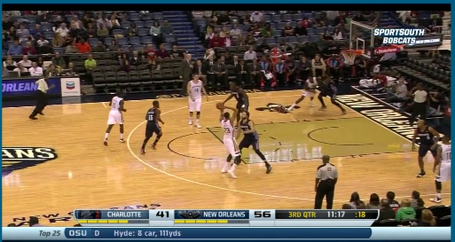 Davis has McRoberts playing up on him and Eric Gordon in the corner. He's going to drive around McRoberts and be unsuccessful in getting around him. When Davis is trapped in his efforts to maneuver around McRoberts, he will dump the ball off to Gordon, who then takes the ball back around to the top of the arc.

Notice Michael Kidd-Gilchrist defending his man up at the top of the screenshot on the left corner. His man is about to cut and Kidd-Gilchrist will follow him. 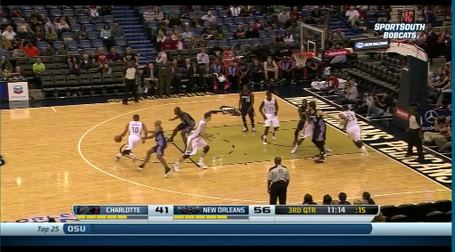 We see here that Kidd-Gilchrist's man ran down to set a very good screen on McRoberts to free Anthony Davis. What Kidd-Gilchrist should have done was switch off onto Davis. Davis is a lot faster than McRoberts is so fighting over the screen would not be ideal. 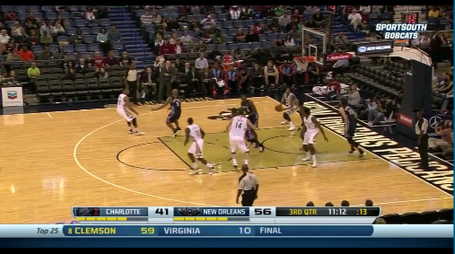 Unfortunately as we see here, Kidd-Gilchrist did not switch, opting to stick to his man as McRoberts came late to recover after fighting over the screen. Davis is now wide open for a dunk and there is no way McRoberts can get there in time to challenge or for Kidd-Gilchrist to react in time. This was one of many communication problems the defense had that night.

This was not the worst defense the Bobcats played that night. The screen the Pelicans set on McRoberts was quite effective as it got two defenders caught up in it and freed Davis. Rather, it was just a bad case of miscommunication in Kidd-Gilchrist over-pursuing and decided to stay to his man rather than switch.

Next we have Jrue Holiday with the ball up at the left wing. 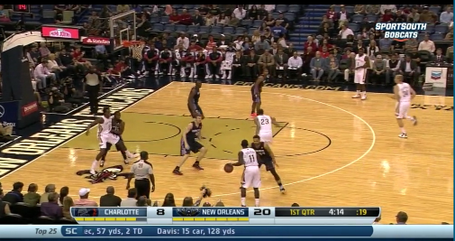 The Pelicans got into their set a little late here as you can see Greg Stiemsma is just now getting up court. He's going to go position himself over in the right corner and Holiday is going to drop it off to Al-Farouq Aminu, who is posting up the much smaller Kemba Walker. When he receives the entry pass, he faces up Walker. 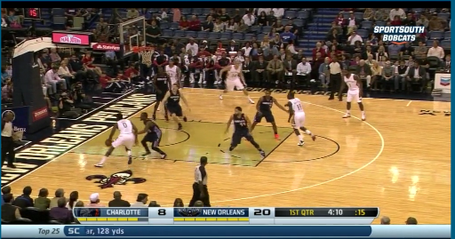 Aminu drives around Walker and everything breaks down. Every single player is currently looking at the ball due to the mismatch of Walker guarding Aminu. Cody Zeller and Jeff Taylor both ran over to help. With three guys getting ready to cover one man, they've left two to cover the other four. This is a comprehensive breakdown that comes with inexperience and not talking to each other.

As every single player ball watches, the currently wide open Stiemsa cuts straight to the basket. Nobody can stop him because the two guys that were helping cover that area of the floor, Taylor and Zeller, went to go help Walker. 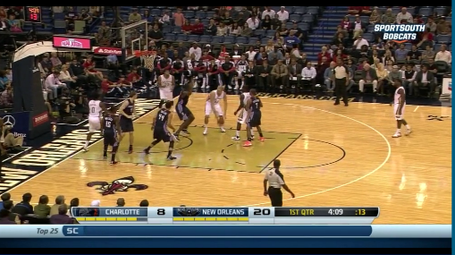 Luckily for the Bobcats Bismack Biyombo gets over to the spot without much of an issue, but it's too late at this point. Stiemsma gets a hook at almost point blank range. The issue here isn't Biyombo, however. Walker, Zeller, and Taylor are all within an arm of each other. Look at the wide open Pelican standing above the 3 point arc; Someone should be there. The defensive collapse brought all five Bobcats into the paint and put all their attention on Aminu, which permitted Stiemsma to cut and find very good positioning close to the hoop. The subsequent pass caught them off-guard, permitting Stiemsma's hook shot on Biyombo.

On the next play we have Tyreke Evans up at the top of the right wing being covered by Gerald Henderson. So far, so good; Everybody appears to be on their man and the the Pelicans are down to 18 seconds left on the shot clock. 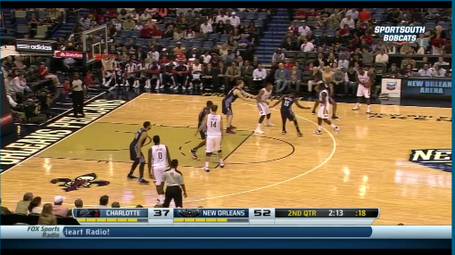 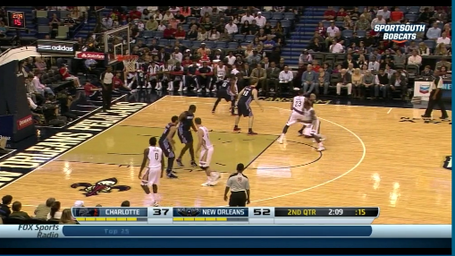 Davis's screen is quite successful in stopping Henderson in his tracks and Davis doesn't plan on slipping this screen. Zeller is completely out of position. He rarely moved since Davis set his last screen and doesn't appear to plan on moving at all except in the event of Holiday passing to Davis. I'm not sure if he's ball watching or if he's committed to staying on Davis but either way, being unaware of the other part of a screen is not effective defense. Regardless, Evans drops Henderson, who is stuck to Davis, and traipses into the paint without any defender and finishes the layup off the Holiday assist over a chasing Biyombo. 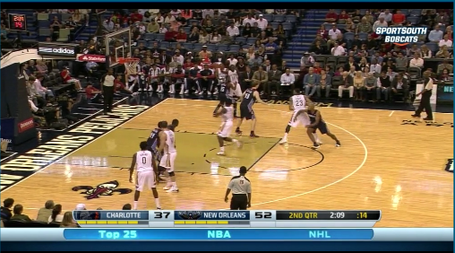 Oops. Caught with his head in the clouds.

The Bobcats interior defense in this game had all kinds of problems. Granted, this was only on the third game of the season, after all. The team is still a work in progress with a rookie coach and trying to figure out rotations and how to mesh together. After they have much more regular season under tutelage Steve Clifford we might, instead of pointing out these flaws, be praising the Bobcats for fixing them. Or we could be talking about how this was an issue for the entire season and they need more rim protectors or interior defenders with better awareness. Either way it's something we need to keep our eyes on.

(All screenshots taken from MySynergySports.com)